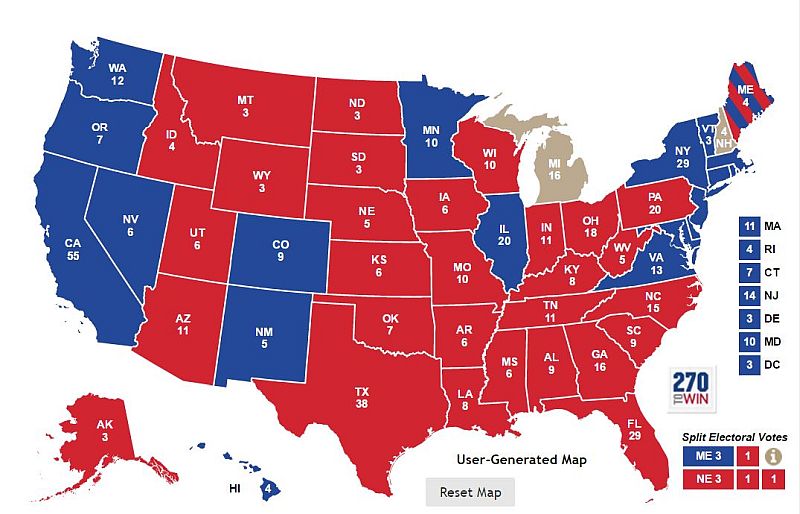 The above image from 270towin.com represents the electoral college map on election night. Donald Trump won handily and is now the President-elect.

Trump took states that were thought to be previous Democratic strongholds, states like Pennsylvania, Wisconsin, Michigan, and Florida. Indeed, he beat the pollsters predictions, and with a force.

But imagine an alternate reality, where the vast majority of Trump’s supporters did not vote. What if the election were decided by the next generation of working Americans: Millennials aged 18-25?

There’s an old saying that goes something along the lines of, never trust a young person. (I know, the irony is thick, given I’m a Millennial writing this story). After you see this map, you’ll realize that saying is most definitely well-deserved.

Prager University broke down the numbers, and if only the 18-25 year old demographic voted, the result would have been an historic landslide for Hillary Clinton. 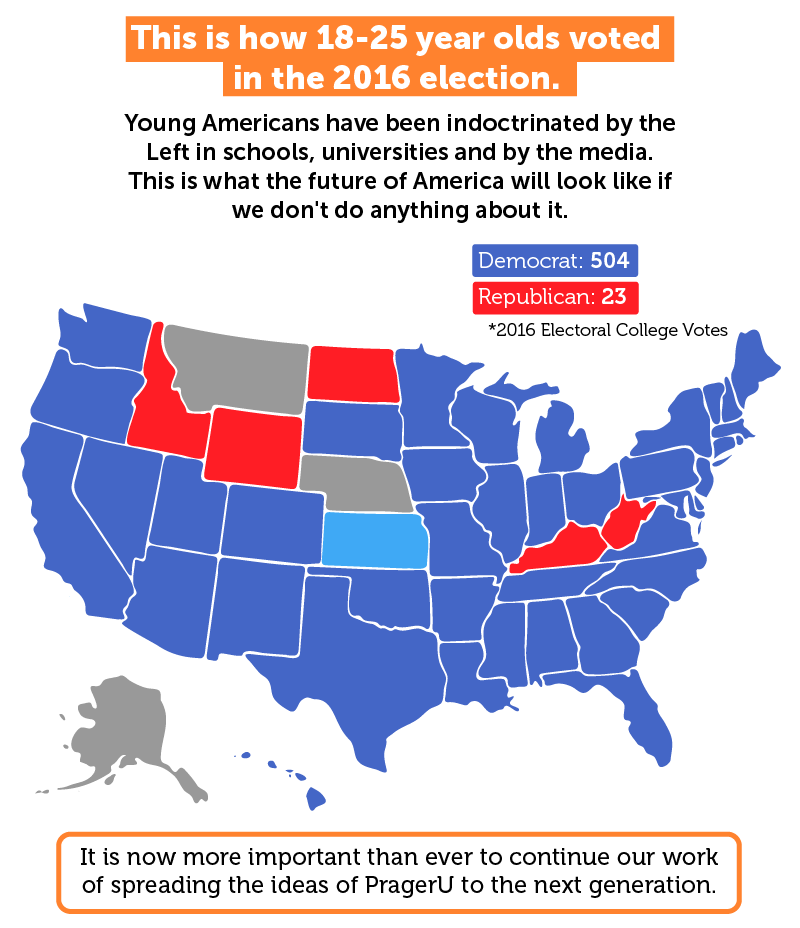 This is potentially the future that we have coming to us. 18-25 year olds have largely been duped into believing that totalitarian government is a good thing, and that said government can protect them from any offenses or economic uncertainty that may come their way.

But this kind of misplaced faith confirms Aristotle’s famous axiom regarding the young: “Youth is easily deceived because it is quick to hope.”

And what has liberated those people from autocratic rule? What enabled hundreds of millions more to escape starvation and poverty?

It was not government control, it was relinquishment of control. It was not stealing wealthy people’s money and handing it to those with less, but by letting people keep more of what they earned.

There are numerous examples of countries turning away from socialism and more towards free market economics, and to the surprise of the Statists, those countries are growing in prosperity.

Yet here in the United States, we have movements to do exactly the opposite of what these countries are doing. The lessons that we learned from observing the Soviet Union and Communist China are no longer taught, and nothing but myths and fantasies are substituted in their place.

There was a time where the political Left in America held a good amount of credibility. Back in the 1960s and 70s, some of their criticisms of the American government were well warranted (see, arguments against the Vietnam War). But since the fall of the Soviet Union, the Left has seemingly taken up the torch for the Soviets and has proceeded to advance their cause here in the States.

The young political Left of the 21st century is much more radical, and much closer to Marxism than we’ve ever seen before. While there have been times in our history where socialist movements gained steam, such as during the Progressive era with leaders such as Eugene V. Debs, what we see today is even more concerning in my assessment.

It’s not merely socialism that these young Leftists are seeking. As Bill Maher put it, it’s “Santa-ism.” These ideas can only be put into practice by a totalitarian government.

If we want to prevent even more government control than what already exists, the time to start myth-busting is now.