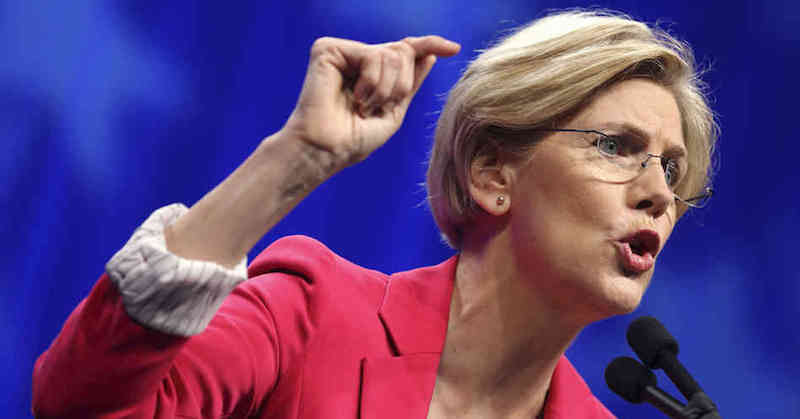 Elizabeth Warren, Democratic U.S. Senator from Massachusetts, has waged a rhetorical war on businesses since she entered office in 2013.

Her mantra has been the typical leftist cry of “corporations need to pay their fair share,” and “not paying your taxes is unpatriotic.” That sort of stuff.

Granted, she’s not 100% wrong here; in every untruth, there is some grain of the truth. It is true that big businesses have been skirting the tax code for decades whereas smaller businesses have not been able to do so. We’ll give her that.

However, what she does not understand is the why. Why are big businesses such as Google and Apple going overseas to tax havens, and bringing jobs out of the United States? This is a perfectly legitimate question, but one which she answers in a way that will only hinder the prosperity that she claims to desire for Americans.

In an op-ed for The New York Times, Warren lays out a case for tax reform that will allegedly close loopholes for big businesses that try to evade the highest tax rate in the world.

APPLE got a big surprise last week when the European Commission ordered Ireland to collect more than $14 billion in back taxes from the company. The global giant had been attributing billions of dollars in profits to a phantom head office, allowing it to pay a tax rate of 1 percent or lower.

Both Apple and Ireland are appealing the decision, but the commission’s announcement was the latest sign that multinational corporations are running out of places to hide from paying taxes. The door is now open for Congress to fix our own corporate tax code, which has allowed the biggest multinationals to shirk their obligations for decades.

The Apple ruling is big, but it is only the latest international effort to end the deals that American multinationals have used to pay near-zero tax rates. The European Commission is investigating Luxembourg’s tax arrangements for Amazon and McDonald’s, and last year the European Court of Justice struck down tax advantages to companies and their subsidiaries selling e-books throughout Europe.

Alright, so she’s identified something here: companies going overseas and putting their subsidiaries and profits in strategic locations to avoid taxes. Check.

So what does she offer as a solution to this?

First, Congress should increase the share of government revenue generated from taxes on big corporations — permanently. In the 1950s, corporations contributed about $3 out of every $10 in federal revenue. Today they contribute $1 out of every $10, despite their reliance on federal investments to start and expand their businesses.

Second, Congress should encourage investment in jobs here in the United States. Giant corporations are pushing corporate tax reform proposals that offer a lower permanent tax rate for earnings generated abroad than earnings generated at home. That is nuts. Preferential tax treatment, either through special rates or deferred due dates, creates a huge financial incentive for American companies to build businesses and create jobs abroad rather than in the United States. Our tax code should favor jobs and businesses at home — period.

Third, Congress should level the playing field for small businesses. Small companies in Massachusetts don’t stash profits in the Netherlands. They can’t hire a team of accountants to set up a “reverse hybrid mismatch” to slash their taxes. This puts small businesses at a competitive disadvantage as they end up shouldering more of the burden of paying for education, infrastructure, research, the military and everything else our nation relies on to succeed.

So each of these three things, what will they entail? Well, based on her well-known ideological stances, it likely means continually increasing the tax rates on businesses, and not much else.

“Increase the share of government revenue generated from taxes on big corporations” is not-so-code language for increasing taxes. In an attempt to make these companies “pay their fair share” (which, I don’t know what your fair share of what someone else has earned is), it inevitably means more taxes. It can’t mean anything else.

Problem? These companies are leaving the United States, and certain EU countries, because of the tax climate in those locations from which they are fleeing. Why did Apple put so much in Ireland? Because the Irish government was not trying to shake down the company for every penny that the public would throw its support behind.

Her next point defies economic logic, as the idea of lower tax rates seems absolutely appalling to her. Well, maybe if the tax rates were not so high, these companies would not be trying to skirt the law and would be paying what is required of them.

Ever think of that possibility?

Finally, she claims that she wants to “level the playing field” for smaller businesses. However, her proposed solutions only exacerbate the problem that she vehemently attacks.

She makes the claim that lower corporate tax rates are a demonstration of “special treatment” to big businesses. However, the opposite is actually the case. Higher tax rates tend to benefit big business, believe it or not. Those companies with large revenue streams can afford to hire the attorneys they need to bypass the tax code.

The little guys cannot afford that, so they end up being run into the ground by the very tax rates that she wants to have as law. The resources left over from small businesses that are decimated are then absorbed by big businesses, thus increasing their power (this is really where monopolies come from, as well).

Each of her ideas only makes the problem more pronounced and proliferated. Higher tax rates will increase incentives to find havens for tax relief, and to hire attorneys who will guide big businesses to exploit loopholes in the massive tax code.

The tax code as it stands is over 74,000 pages. This sort of convoluted, voluminous monstrosity puts the power in the hands of the government and in big businesses who exploit that tax code.

Where big government exists, big business will congregate, seeking to get favorable treatment to dominate the marketplace. Elizabeth Warren’s proposals only increase the power of the federal government and take money out of the hands of those who will invest in the future.

Where government is smaller, the businesses have to win the hearts and minds of the people in the market, through competition and voluntary transactions, without the State’s monopoly on force looming in the background.

If she really understood economics, she would realize this kind of plan only make the situation worse. But yet again, with this sort of thing, it never ends up being about the greater good. Only about increasing the power of the government over the people; every single time.