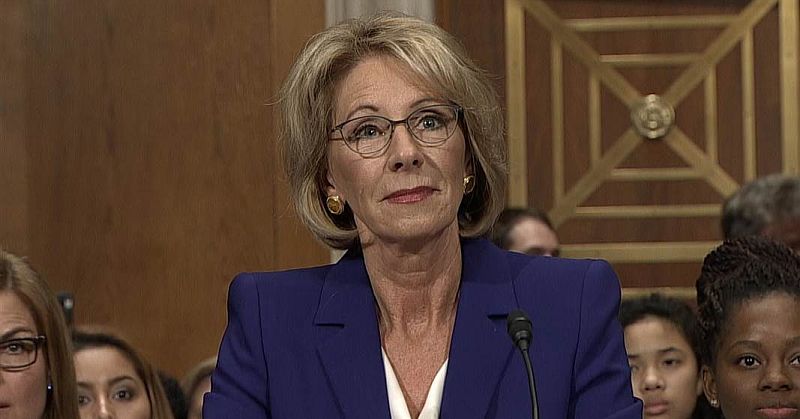 During the Senate hearing for the nomination of Betsy DeVos for Secretary of the Department of Education, the prospective Secretary was questioned about the issue of guns in schools by Connecticut Senator Chris Murphy (D).

As CNN reported, the Democratic Senator asked DeVos, “Do you think that guns have any place in or around schools?”

DeVos, somewhat stumbling at first, responded by saying, “I think that’s best left to states and locales to decide… If the underlying question is…”; it was here that Murphy interjected, further pressing her on the issue.

“You can’t say definitively today that guns shouldn’t be in schools?”

She then responded by referencing a previous Senator’s remarks, Mike regarding schools in Wyoming, where they are possibly guns in the school to defend against grizzly bears; not an invalid concern in a rural state like Wyoming.

However, the media heard this and ran with it to all sorts of places that are far beyond the actual meaning of DeVos’ statement.

Jason Russell of The Washington Examiner wrote about how, contrary to the spurious ravings of the media, she did not come out and say that we need guns to protect us from grizzly bears.

ThinkProgress wrote a headline reading: “Betsy DeVos says guns in schools may be necessary to protect students from grizzly bears”

But the problem is that this is not what she said; that was not the rule that she espoused. No, she pointed to a specific example that came up in a previous questioning round. But that didn’t stop Chuck Schumer from misleading the public about the nature of her comments.

DeVos responds to @ChrisMurphyCT with support for Trump plan to get rid of gun free zones; cites grizzly bears as reason for guns in schools pic.twitter.com/EPcocq8an4

DeVos did not say that we need guns in all of our schools, or even in any of our schools. She said it shouldn’t be the federal government’s place to decide. She used grizzlies in rural areas as one example for why a school might choose to have guns. By no means did she suggest that urban or suburban schools should have guns to protect them from grizzlies.

If Murphy wouldn’t have cut her off, perhaps she’d have given some reasonable examples of why guns might be needed in suburban or urban schools. Either way, she made it clear she thinks it’s a decision for state and local governments to make.

But the context of what she said was not important to the Leftist gun-grabbers, who have nothing better to do than argue about why we need to leave our children defenseless.

Murphy, though possibly well-intentioned in his efforts, is not providing solutions that will legitimately make our children safer in school.

What good does the parchment barrier of a no-gun policy do to stop evil people who have guns and a plot to take life? It simply doesn’t do any good. Only another person, armed and trained to stop threats can do so.

The Left completely loses it whenever the talk of guns in schools comes up, but that is because they are projecting a false reality onto those who own and carry handguns on a daily basis. They believe everyday carriers to be angry people with a short fuse who are ready to blow at any moment.

The irony? It’s the people projecting this that have such tendencies many a time.

Contrary to what these gun-grabbers think, there are already innumerable schools across the country that have taken the steps to protect their students with armed personnel. Utah has had carry in schools statutorily authorized for over 20 years without a single incident of teachers attacking students or anyone else with their firearm.

Other states, such as Colorado and Texas, have followed suit, and school districts are facing reality head on and equipping their staff to do what the Left refuses to do: protect our kids.

DeVos, though struggling with the delivery in my assessment, portrayed this view, and stated that she would follow the lead of the Trump administration (he has stated that he wants to look into repealing the Gun Free School Zones Act).

In addition to the issue of armed staff, DeVos also hit on an important issue in the beginning of her response to Murphy: federalism.

Indeed, education IS the responsibility of states and localities, not the federal government. There is no constitutional authority to regulate education, and that includes how educational facilities secure their grounds.

And yes, that includes choosing to arm staff to protect students.