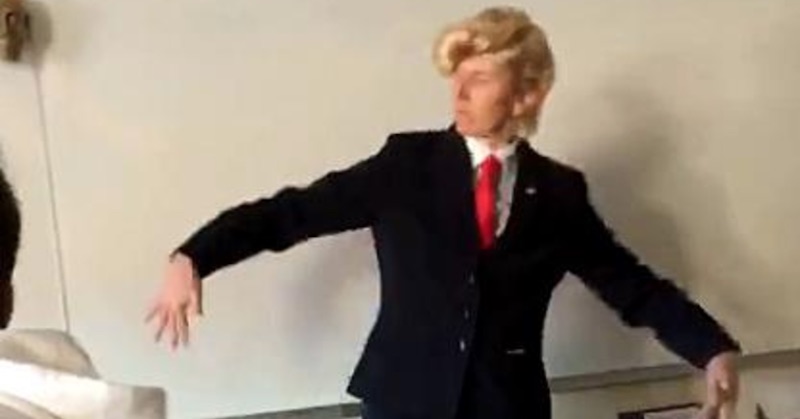 A math teacher in New Hampshire dressed up like Donald Trump for Halloween for his class and was shown in a video dancing to a “F**k Donald Trump” rap tune that someone was playing.

It’s a very brief video, and doesn’t show whether or not the teacher eventually removed the mask and scolded the student for playing the offensive song, or expressed regret for dancing to the tune, but the teacher, Portsmouth High School geometry teacher Kara Kelley, has been apparently placed on leave.  (Warning: The video contains vulgar language):

Superintendent of Schools Stephen Zadravec said Monday that he can’t comment about specifics involving the incident, or the teacher, Kara Kelley, because it’s a personnel matter, he told the SeaCoastOnline.

“But I will say that the teacher is not presently in the classroom and we are investigating the situation,” Zadravec said. “There is no place for offensive language in our school community, nor is it our practice in school to support or discredit political candidates.”

The video was posted on some parents’ Facebook pages and they were none too pleased. They called the teachers’ actions “inappropriate” and “out of bounds.” SeaCoastOnline reports:

Michael Grondahl said his son was in Kelley’s geometry class when the incident occurred Monday morning. He said his son contacted him shortly after 9 a.m. to say Kelley was “making fun of” Trump in the classroom.

“He texted us and he felt very uncomfortable,” said Grondahl. “It’s not even like this was a sociology teacher. This is a geometry teacher.”

Grondahl said the language in the music Kelley chose to play was “in bad judgment.”

“She should be setting a better example,” he said.

The irony, Grondahl said, is that after he took his family to a Trump rally in Portsmouth, Kelley asked his son in school if he thought Trump was a good role model.

Students, teachers and parents alike have nothing but positive things to say about teacher Kara Kelley, saying she is “one of the most incredible, kind-hearted, funniest people in our school.”

“She’s dressed up every year that I can remember, and this year she dressed up as Trump,” according to the self-identified student. “Another student played the song, not her. Yes, she danced to it, but she did in no way intentionally play the song.”

Marcy Baer, the parent of a PHS senior, said she saw the video and became involved in a social media debate about it. She said she believes Kelley “crossed the line” and the song she was dancing to also includes the “N” word.

“The song itself is very offensive,” she said.

Baer said she believes the school took appropriate action but doesn’t think Kelley should be fired.

“It was poor judgment the teacher made today and you know what, we all make them,” Baer said. “She made a bad choice, so let’s show (the students) that’s not how we act in a social setting. It’s about the offensiveness in the classroom.” 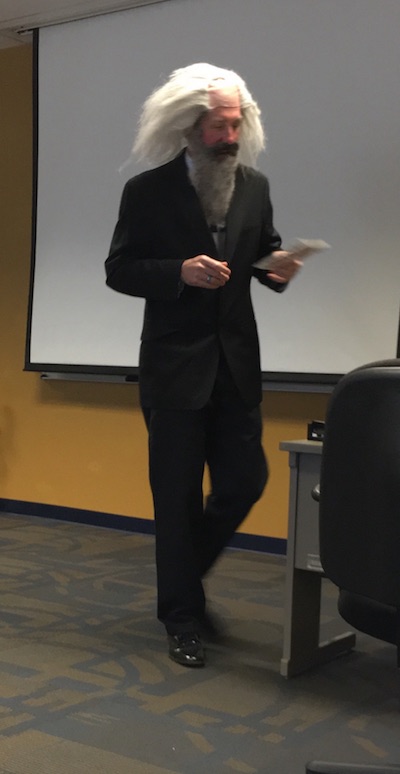 On a personal note at my college, professors dressed up as various characters for Halloween on Monday. A biology professor had a Dick Cheney mask and as a political science instructor, I dressed up as Karl Marx (I am reluctantly posting the picture ). But I used the costume as part of the discussion of political ideology, which is the point of the entire class. (I know it doesn’t look that good, but hey – there aren’t that many “Karl Marx” costumes available at Party City.)

A geometry teacher dressing up as Donald Trump is one thing, but once that “F**k Donald Trump” music starts playing, you don’t dance to it – you put a stop to it right away.