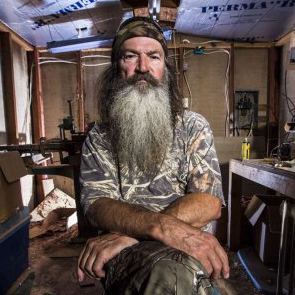 This seems to me like political correctness run amucketh. Is one not allowed to express traditional christian views and personal opinion without fear of being fired do we truly live in a free country?

Via The Hollywood Reporter:

A&E has placed Duck Dynasty patriarch Phil Robertson on indefinite hiatus following anti-gay remarks he made in a recent profile in GQ.

“We are extremely disappointed to have read Phil Robertson’s comments in GQ, which are based on his own personal beliefs and are not reflected in the series Duck Dynasty,” A&E said in a statement. “His personal views in no way reflect those of A+E Networks, who have always been strong supporters and champions of the LGBT community. The network has placed Phil under hiatus from filming indefinitely.”

The news comes after Robertson compared homosexuality to bestiality in an interview with the magazine. He’ll likely appear in season four, which bows Jan. 15, since production is largely wrapped.

“It seems like, to me, a vagina — as a man — would be more desirable than a man’s anus,” Robertson says in the January issue of the men’s magazine. “That’s just me. I’m just thinking: There’s more there! She’s got more to offer. I mean, come on, dudes! You know what I’m saying? But hey, sin: It’s not logical, my man. It’s just not logical.”

During a discussion about repentance and God, Robertson is asked what he finds sinful.

He goes on to paraphrase Corinthians: “Don’t be deceived. Neither the adulterers, the idolaters, the male prostitutes, the homosexual offenders, the greedy, the drunkards, the slanderers, the swindlers — they won’t inherit the kingdom of God. Don’t deceive yourself. It’s not right.”

GLAAD on Wednesday condemned his remarks as “some of the vilest and most extreme statements uttered against LGBT people in a mainstream publication” and said “his quote was littered with outdated stereotypes and blatant misinformation.”

“Phil and his family claim to be Christian, but Phil’s lies about an entire community fly in the face of what true Christians believe,” GLAAD spokesperson Wilson Cruz said. “He clearly knows nothing about gay people or the majority of Louisianans — and Americans — who support legal recognition for loving and committed gay and lesbian couples. Phil’s decision to push vile and extreme stereotypes is a stain on A&E and his sponsors, who now need to re-examine their ties to someone with such public disdain for LGBT people and families.”