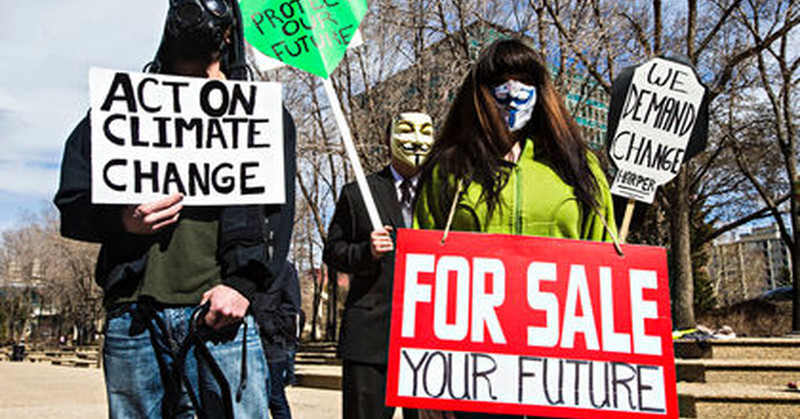 One of the biggest scams being perpetrated by the radical left is the “climate change” nonsense they continually spout off, time and time again.

The claim that this new breed of environmentalists repeatedly make is that if we don’t start slapping businesses with more and more regulations on carbon emissions, the whole planet will explode, or the ice caps will melt, and we’ll have to share our Coca-Cola with polar bears or some sort of nightmare apocalypse scenario.

Of course, liberal politicians could give two rips less about the planet or the current real estate market for polar bears. They see climate change as an opportunity to dig their paws into the free market, regulate businesses, and redistribute wealth.

The left has become so hostile over this issue that they’re now attempting to crumple up the First Amendment and make it illegal to speak out against the very questionable science of climate-change.

Check out what’s happening in California.

A landmark California bill would make it illegal to engage in climate-change dissent, clearing the way for lawsuits against fossil-fuel companies, think-tanks and others that have “deceived or misled the public on the risks of climate change.”

The first-of-its-kind legislation — Senate Bill 1161, or the California Climate Science Truth and Accountability Act of 2016 — is scheduled for floor action Thursday after clearing Senate committees in April and May.

The measure, which cleared two Senate committees, provided a four-year window in the statute of limitations on violations of the state’s Unfair Competition Law, allowing legal action to be brought until Jan. 1 on charges of climate change “fraud” extending back indefinitely.

“This bill explicitly authorizes district attorneys and the Attorney General to pursue UCL claims alleging that a business or organization has directly or indirectly engaged in unfair competition with respect to scientific evidence regarding the existence, extent, or current or future impacts of anthropogenic induced climate change,” said the state Senate Rules Committee’s floor analysis of the bill.

Yes, that’s right my fellow American friends, your right to speak out in dissent against the status quo progressive agenda being pushed by the government is in danger of going extinct.

The bill, introduced by Democratic state Sen. Ben Allen, makes questioning global warming a violation of the state’s Unfair Competition Act, and it would retroactively extend the statute of limitations on being prosecuted for climate hearsay from four years to 30 years.

“Given the environmental, health, and economic impacts that Californians are already paying for as a result of the fossil fuel industry’s many years of public deception and their efforts to block action on climate change, it is important to hold the industry responsible,” Allen’s office wrote in the bill’s summary.

Allen’s bill would make it easier for state and local prosecutors to join an ongoing investigation into ExxonMobil’s global warming stance. California Attorney General Kamala Harris is currently investigating Exxon for allegedly misleading shareholders about the risks of global warming.

Sure, this isn’t surprising coming from California — they don’t call it the land of fruits and nuts for nothing — but how long will it be before this form of censorship, which clearly violates the Constitution, makes its away across the country?

You can guarantee it will spread like wildfire if it passes.

I truly believe it should be mandatory at both the state and federal level for elected officials to take a Constitution refresher course with a specific focus on the Bill of Rights.

Perhaps, though it’s unlikely, this will remind these so-called “servants of the public” that they are to defend the Constitution, not use it as toilet paper.

Editor’s note: SB1161 officially died on Thursday, June 2 after the state senate failed to take up the bill before the deadline.

Michael Cantrell
Michael Cantrell is a writer/blogger with over 8 years of professional experience. He is dedicated to using his skills to uphold conservative principles and defend liberty to the best of his ability. Michael believes wholeheartedly in the Constitution and the principles it was created from and seeks to communicate these eternal truths through engaging pop culture. Michael is also an avid comic book fan and loves movies, music, and television. But most of all, he loves Jesus.
Obama Backs Hillary, Does Massive Damage to the Constitution
Hillary Clinton Launches 'Republicans Against Trump' Website to Lure GOP Voters
New Law in Norway Allows Transgender to Self-Declare Without Psych Evaluations
Gov. Scott Walker Backs off From Endorsing Donald Trump for President
Marilyn Mosby Being Sued by Two Officers Facing Charges in Freddie Gray Case
See more...