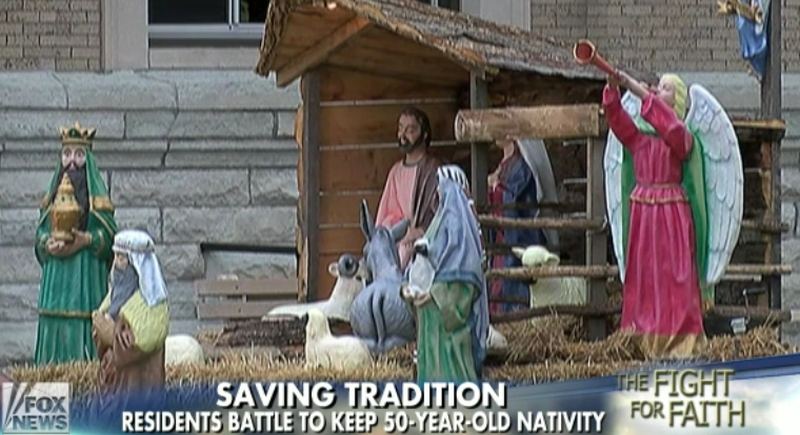 It happens every year at Christmas in different places.  Atheists feign outrage over Nativity scenes being placed in public areas.  They claim religion is being forced upon them in a government space.  Apparently they don’t understand the First Amendment very well.

As reported by Bizpacreview:

He said that contrary to what the foundation believes, the law allows for this type of display.

“They’re misreading the law because… you can have a religious display in an open forum as long as you’re providing everyone the same opportunity,” he said. “If someone wanted to come along and asked us to put a Star of David and a Menorah on the courthouse lawn, we would permit that. No one is being denied access to the public forums.”

McDonough also gave some advice to other towns who face similar litigation.

“Stop letting them bully you. They go around threatening to sue municipalities, other government agencies if they permit any type of religious display,” he said. “They use the misconceptions about the separation of church and state to make everyone afraid of getting into the middle of a lawsuit, when the Constitution does protect you.”

Watch the latest video at video.foxnews.com

The Indianapolis History Examiner Mischelle Crosby had this to say:

Residents of Brookville, Indiana got an unpleasant holiday surprise when they found out their town was the center of a debate about First Amendment rights. What was so appalling that an Atheist group from Wisconsin would target Brookville weeks before Christmas? The problem came in the form of a nativity scene that had been put around the courthouse’s flagpole by the local firefighters every year for the last 50 years.

According to WKRC (Cincinnati), “The Freedom From Religion Foundation in Madison, Wisconsin, sent Franklin County Commissioners a stern letter telling them their annual nativity violates the separation of church and state.” (Webb) When interviewed by Scott Wegener of WCPO.com (ABC), Rebecca Markert, the staff attorney for FFRF stated, “that some of their members lived in the town and contacted them to help.” (Wegener)

In 1789, the First Amendment was enacted, “Congress shall make no law respecting an establishment of religion, or prohibiting the free exercise thereof; or abridging the freedom of speech, or of the press; or the right of the people peaceably to assemble, and to petition the government for a redress of grievances.” It does not say the words, “separation of Church and State”.

The words “wall of separation of Church and State” first appeared in 1802 in a letter of Thomas Jefferson. Since then, courts have interpreted the First Amendment to mean that there can be no mention or decoration of religion in a government property; and it has been used to take any religious pictures from government buildings. Whether “under God” should be in the pledge of the United States of America while it was being said in school is a big controversy about the separation of Church and State. What is next? Are Atheists groups going to try and take “In God We Trust” off of our currency?

Another Christmas season brings yet another atheist outrage.

The town has already told them they are permitted to put a symbol on the courthouse lawn that shows their beliefs as well.  Of course, for Atheists it would just be a blank space right?