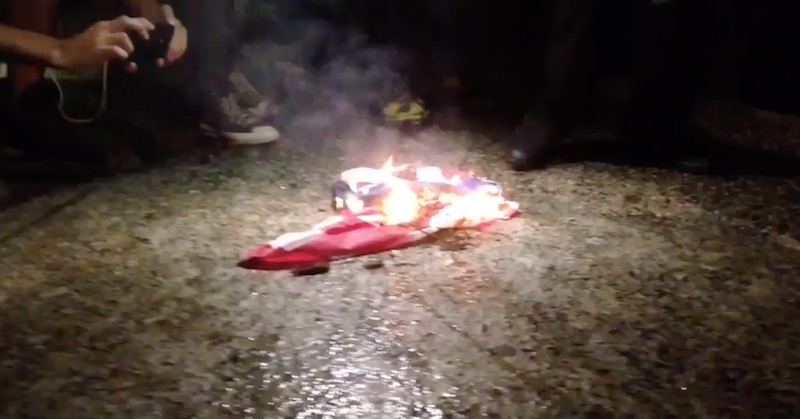 President-Elect Donald Trump is calling for “consequences” for burning the American flag, in spite of two Supreme Court rulings protecting burning the flag as a form of free speech.

“Nobody should be allowed to burn the American flag — if they do, there must be consequences — perhaps loss of citizenship or year in jail!”

Nobody should be allowed to burn the American flag – if they do, there must be consequences – perhaps loss of citizenship or year in jail!

In two separate court cases, the Supreme Court has affirmed the right to “desecrate” the American flag as a form of free speech.

In the 1989 case Texas v. Johnson, the Court ruled 5-4 that flag burning was a form of “symbolic speech” protected by the First Amendment. One year later, in United States v. Eichman, the court affirmed the decision when it declared the “Flag Protection Act of 1989” unconstitutional.

Lest any leftists get all arrogant and irate, it’s important to remember than in 2005, then-Sen. Hillary Clinton introduced a bill that would have also outlawed flag burning – with punishments of one year in jail and a fine of $100,000. It was called the “Flag Protection Act of 2005.”

The law was never considered nor passed by Congress, so its constitutionality was not challenged, but the act was summarized by the Congressional Research Service as such:

Amends the federal criminal code to revise provisions regarding desecration of the flag to prohibit: (1) destroying or damaging a U.S. flag with the primary purpose and intent to incite or produce imminent violence or a breach of the peace; or (2) stealing or knowingly converting the use of a U.S. flag either belonging to the United States or on lands reserved for the United States and intentionally destroying or damaging that flag.

It’s not clear what exactly prompted Trump’s tweet. There was a flag-burning on Nov. 10 on the campus of Hampshire College in Amherst, Massachusetts as part of an anti-Trump election protest. As a result, the school insanely decided to stop flying all flags on the college.

On CNN, Trump transition spokesman Jason Miller dismissed any questions about the constitutionality of flag-burning.

“Flag burning should be illegal,” Miller told CNN’s Chris Cuomo. “The President-elect is a very strong supporter of the First Amendment, but there’s a big difference between that and burning the American flag.”

One thing is certain: Nothing increases the incidents of flag-burning in the United States more than calls to criminalize it. I can guarantee you we will see more flag-burnings now as a direct result of President-Elect Trump’s tweet.

What do you think? Should there be criminal penalties for desecrating the American Flag? Given the Supreme Courts’ back-to-back decisions, it would likely take a Constitutional Amendment. Is this something worth pursuing?