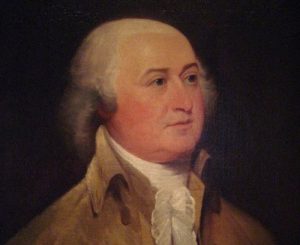 I have long had it in contemplation to pay my respects to you, but a wandering life and various avocations have hitherto prevented.

I am very happy to find that our labors in convention were not in vain. The Constitution, as finished by the convention and accepted by the people, is publishing in all the public papers of Europe, the report of the committee having been published before. Both have been treated with much respect both in Europe and in the other States of America. The noble simplicity of your address to the people is much admired. The substitute for the Governor’s negative is generally thought an amelioration, and I must confess it is so widely guarded that it has quite reconciled me.

I want to hear of the elections. If these are made with as much gravity, sobriety, wisdom, and integrity as were discovered in the convention and among the people, in the whole course of this great work, posterity will be happy and prosperous. The first citizen will be one of two whom we know.

Whichever it may be, I wish him support and success. It is no light trust. However ambitious any may be of it, whoever obtains this distinction, if he does his duty, will find it a heavy burden. There are, however, other great trusts. The Governor’s office will be rendered more or less useful, according to the characters that compose the Senate and the Council. If the people are as prudent in the choice of these as they were in the choice of the convention, let the Governor be almost what he will, he will not be able to do much harm; he will be necessitated to do right.

There is nothing which I dread so much as a division of the republic into two great parties, each arranged under its leader, and concerting measures in opposition to each other. This, in my humble apprehension, is to be dreaded as the greatest political evil under our Constitution. We cannot have a bad Governor at present. We may not possibly have the best that might be found, but we shall have a good one; one who means to do no evil to his country, but as much good as he can.

The convention I shall ever recollect with veneration. Among other things, for bringing me acquainted with several characters that I knew little of before, of which number Mr. Jackson is one. I shall be much honored, Sir, if you would be so good as to write me the state of things. There are more opportunities from your port to Spain and Holland, I think, than from any other.