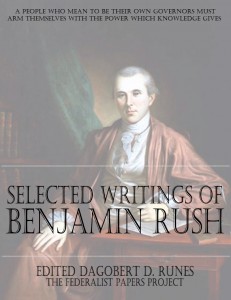 “If a great man dies there is a hole in the world.” There are few memorials  that praise his name in  our country yet few were as fiery as he, or more influential, in the rebellion that brought this country into being; and few held the standards of its early learning and culture as high as he held them.

There can be no doubt as to the depth of Benjamin Rush’s burning patriotism, his hatred of the British oppression, and of all tyranny. His signature on the Declaration of Independence was by no means a merely formal one. It signified not only his people’s fight against British domination, but his continuing resolve to battle tyranny, intolerance, and suppression in his native America.

Benjamin Rush’s pamphlets, articles, letters, and speeches mount into the thousands. He pleaded for the abolition of slavery. He argued for the amelioration of the lot of civil prisoners. He advocated the establishment of special hospitals for the insane. There was no current cause worthy of support that did not benefit from the warm heart, the outstretched hand, and the uplifted voice of Benjamin Rush.