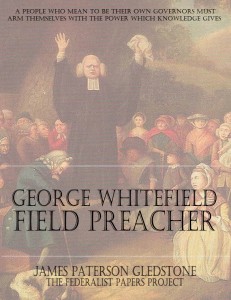 George Whitefield, also known as George Whitfield, was an English Anglican preacher who helped spread the Great Awakening in the British North American colonies. He was one of the founders of Methodism and of the evangelical movement generally.

He became perhaps the best-known preacher in Britain and America in the 18th century, and because he traveled through all of the American colonies and drew great crowds he was one of the most widely recognized public figures in colonial America.

The greatness of Whitefield’s labors is not easily realized, and not even a three-volume life could outline it. One month’s labors are recorded in this brief sentence—”he preached to ten thousand persons every day for twenty-eight days”.

The far-reaching influence of his preaching can only be imagined by remembering that his vast congregations were often gathered together in thinly populated districts the backwoods of the American settlements—persons coming long distances, at great cost of time and trouble, to hear him.

He said of his forest-preaching— “I am hunting after poor sinners in these ungospelized wilds. People are willing to hear, and I am willing to preach.” He mounted his horse, and rode to a point where he and they could come into contact.