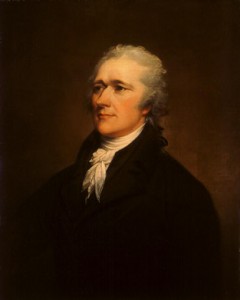 Whoever attentively considers the different departments of power must perceive, that, in a government in which they are separated from each other, the judiciary, from the nature of its functions, will always be the least dangerous to the political rights of the Constitution; because it will be least in a capacity to annoy or injure them. The Executive not only dispenses the honors, but holds the sword of the community.

The legislature not only commands the purse, but prescribes the rules by which the duties and rights of every citizen are to be regulated. The judiciary, on the contrary, has no influence over either the sword or the purse; no direction either of the strength or of the wealth of the society; and can take no active resolution whatever. It may truly be said to have neither FORCE nor WILL, but merely judgment; and must ultimately depend upon the aid of the executive arm even for the efficacy of its judgments.

This simple view of the matter suggests several important consequences. It proves incontestably, that the judiciary is beyond comparison the weakest of the three departments of power1; that it can never attack with success either of the other two; and that all possible care is requisite to enable it to defend itself against their attacks. It equally proves, that though individual oppression may now and then proceed from the courts of justice, the general liberty of the people can never be endangered from that quarter; I mean so long as the judiciary remains truly distinct from both the legislature and the Executive.

For I agree, that “there is no liberty, if the power of judging be not separated from the legislative and executive powers.”2 And it proves, in the last place, that as liberty can have nothing to fear from the judiciary alone, but would have every thing to fear from its union with either of the other departments; that as all the effects of such a union must ensue from a dependence of the former on the latter, notwithstanding a nominal and apparent separation; that as, from the natural feebleness of the judiciary, it is in continual jeopardy of being overpowered, awed, or influenced by its co-ordinate branches; and that as nothing can contribute so much to its firmness and independence as permanency in office, this quality may therefore be justly regarded as an indispensable ingredient in its constitution, and, in a great measure, as the citadel of the public justice and the public security.