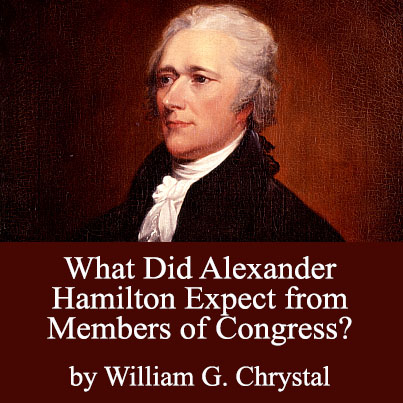 As an historical interpreter of Alexander Hamilton, I’m often asked what Hamilton would think about particular modern policies and legislation.  Of course, it’s nearly impossible to take the views of Hamilton—operating in a much different nation and world, more than two hundred years ago—and apply them accurately to our own circumstances and time.  Hamilton was a deep, rational thinker.  He would doubtless eschew all such attempts.

But this much we do know. Hamilton was a political realist.  He knew that humans are self-interested beings, usually intent on pursuing that which benefits them directly. Thus, government is necessary, he reasoned, “because the passions of man will not conform to the dictates of reason and justice, without constraint.”  His early political ally, James Madison, perhaps said it best:  “If all men were angels there would be no need for government.” Yet Hamilton was also an idealist when it came to politics.  He believed that “fit men” could be identified and elected to political office—people who would work tirelessly for the benefit of all.  This was a view he embraced early and perhaps articulated best in a series of newspaper articles written during the Revolutionary War.

Hamilton was disgusted by charges that a Member of Congress was using insider information to engage in business deals that hurt the army’s ability to provision its soldiers.  As Aide de Camp to General George Washington, Hamilton was in a position to see the impact of such selfishness.  And, in a series of three newspaper articles, he not only condemned the legislator’s activities but outlined as well what he thought should be the characteristics of a virtuous Member of Congress.

The portion of Hamilton’s essay contained here is reminiscent of  an ancient genre of literature known as the  “mirror of princes.”  These were essays written to show rulers what was required in order for them to govern wisely.   Hamilton’s idealism and his belief that “fit” people can rise above self-interest and do what is best for all is clearly manifest here.  This is an important addition to Hamilton’s realistic political writings, as it helps us to understand that both realism and idealism are necessary for effective politicians.

“The station of a member of Congress is the most illustrious and important of any I am able to conceive.  He is to be regarded not only as a legislator, but as the founder of an empire.  A man of virtue and ability, dignified with so precious a trust, would rejoice that fortune had given him birth at a time, and placed him in circumstances so favorable for promoting human happiness.  He would esteem it not more the duty, than the privilege and ornament of his office, to do good to mankind, from this commanding eminence, he would look down with contempt upon every mean or interested pursuit.

To form useful alliances abroad—to establish a wise government at home—to improve the internal resources and finances of the nation would be the generous objects of his care.  He would not allow his attention to be diverted from these to intrigue for personal connections, to confirm his own influence; nor would be able to reconcile it, either to the delicacy of his honor, or to the dignity of his pride, to confound in the same person the representative of the Commonwealth, and the little member of a trading company.  Anxious for the permanent power and prosperity of the State, he would labor to perpetuate the union and harmony of the several parts.  He would not meanly court a temporary importance, by dissensions either among the people or in Congress.

In council, or debate, he would discover the candor of a statesman, zealous for truth, and the integrity of a patriot studious of the public welfare; not the caviling petulance of an attorney, contending for the triumph of an opinion, nor the perverse duplicity of a partisan, devoted to the service of a cabal.  Despising the affectation of superior wisdom, he would prove the extent of his capacity, by foreseeing evils, and contriving expedients to prevent or remedy them.  He would not expose the weak sides of the State, to find an opportunity of displaying his own discernment, by magnifying the follies and mistakes of others.  In his transactions with individuals, whether foreigners or countrymen, his conduct would be guided by the sincerity of a man, and the politeness of a gentleman, not by the temporizing flexibility of a courtier, nor the fawning complaisance of a sycophant.”

Get Bill’s books “Hamilton By the Slice: Falling in Love with Our Most Influential Founding Father” and “Thomas Jefferson Verses Alexander Hamilton: In Their Own Words” at AMAZON. You can find out more about Bill’s work and historical interpretation services at www.William-G-Chrystal.com.