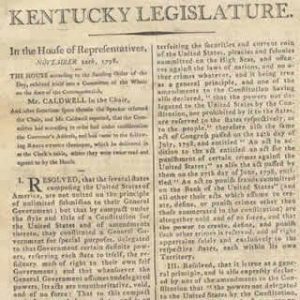 1. Resolved, That the several States composing, the United States of America, are not united on the principle of unlimited submission to their general government; but that, by a compact under the style and title of a Constitution for the United States, and of amendments thereto, they constituted a general government for special purposes — delegated to that government certain definite powers, reserving, each State to itself, the residuary mass of right to their own self-government; and that whensoever the general government assumes undelegated powers, its acts are unauthoritative, void, and of no force: that to this compact each State acceded as a State, and is an integral part, its co-States forming, as to itself, the other party: that the government created by this compact was not made the exclusive or final judge of the extent of the powers delegated to itself; since that would have made its discretion, and not the Constitution, the measure of its powers; but that, as in all other cases of compact among powers having no common judge, each party has an equal right to judge for itself, as well of infractions as of the mode and measure of redress.

2. Resolved, That the Constitution of the United States, having delegated to Congress a power to punish treason, counterfeiting the securities and current coin of the United States, piracies, and felonies committed on the high seas, and offenses against the law of nations, and no other crimes, whatsoever; and it being true as a general principle, and one of the amendments to the Constitution having also declared, that “the powers not delegated to the United States by the Constitution, not prohibited by it to the States, are reserved to the States respectively, or to the people,” therefore the act of Congress, passed on the 14th day of July, 1798, and intituled “An Act in addition to the act intituled An Act for the punishment of certain crimes against the United States,” as also the act passed by them on the — day of June, 1798, intituled “An Act to punish frauds committed on the bank of the United States,” (and all their other acts which assume to create, define, or punish crimes, other than those so enumerated in the Constitution,) are altogether void, and of no force; and that the power to create, define, and punish such other crimes is reserved, and, of right, appertains solely and exclusively to the respective States, each within its own territory.

3. Resolved, That it is true as a general principle, and is also expressly declared by one of the amendments to the Constitutions, that “the powers not delegated to the United States by the Constitution, our prohibited by it to the States, are reserved to the States respectively, or to the people”; and that no power over the freedom of religion, freedom of speech, or freedom of the press being delegated to the United States by the Constitution, nor prohibited by it to the States, all lawful powers respecting the same did of right remain, and were reserved to the States or the people: that thus was manifested their determination to retain to themselves the right of judging how far the licentiousness of speech and of the press may be abridged without lessening their useful freedom, and how far those abuses which cannot be separated from their use should be tolerated, rather than the use be destroyed. And thus also they guarded against all abridgment by the United States of the freedom of religious opinions and exercises, and retained to themselves the right of protecting the same, as this State, by a law passed on the general demand of its citizens, had already protected them from all human restraint or interference. And that in addition to this general principle and express declaration, another and more special provision has been made by one of the amendments to the Constitution, which expressly declares, that “Congress shall make no law respecting an establishment of religion, or prohibiting the free exercise thereof, or abridging the freedom of speech or of the press”: thereby guarding in the same sentence, and under the same words, the freedom of religion, of speech, and of the press: insomuch, that whatever violated either, throws down the sanctuary which covers the others, arid that libels, falsehood, and defamation, equally with heresy and false religion, are withheld from the cognizance of federal tribunals. That, therefore, the act of Congress of the United States, passed on the 14th day of July, 1798, intituled “An Act in addition to the act intituled An Act for the punishment of certain crimes against the United States,” which does abridge the freedom of the press, is not law, but is altogether void, and of no force.

4. Resolved, That alien friends are under the jurisdiction and protection of the laws of the State wherein they are: that no power over them has been delegated to the United States, nor prohibited to the individual States, distinct from their power over citizens. And it being true as a general principle, and one of the amendments to the Constitution having also declared, that “the powers not delegated to the United States by the Constitution, nor prohibited by it to the States, are reserved to the States respectively, or to the people,” the act of the Congress of the United States, passed on the — day of July, 1798, intituled “An Act concerning aliens,” which assumes powers over alien friends, not delegated by the Constitution, is not law, but is altogether void, and of no force. 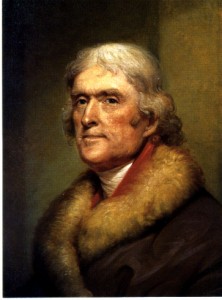 5. Resolved. That in addition to the general principle, as well as the express declaration, that powers not delegated are reserved, another and more special provision, inserted in the Constitution from abundant caution, has declared that “the migration or importation of such persons as any of the States now existing shall think proper to admit, shall not be prohibited by the Congress prior to the year 1808” that this commonwealth does admit the migration of alien friends, described as the subject of the said act concerning aliens: that a provision against prohibiting their migration, is a provision against all acts equivalent thereto, or it would be nugatory: that to remove them when migrated, is equivalent to a prohibition of their migration, and is, therefore, contrary to the said provision of the Constitution, and void.

6. Resolved, That the imprisonment of a person under the protection of the laws of this commonwealth, on his failure to obey the simple order of the President to depart out of the United States, as is undertaken by said act intituled “An Act concerning aliens” is contrary to the Constitution, one amendment to which has provided that “no person shalt be deprived of liberty without due progress of law”; and that another having provided that “in all criminal prosecutions the accused shall enjoy the right to public trial by an impartial jury, to be informed of the nature and cause of the accusation, to be confronted with the witnesses against him, to have compulsory process for obtaining witnesses in his favor, and to have the assistance of counsel for his defense;” the same act, undertaking to authorize the President to remove a person out of the United States, who is under the protection of the law, on his own suspicion, without accusation, without jury, without public trial, without confrontation of the witnesses against him, without heating witnesses in his favor, without defense, without counsel, is contrary to the provision also of the Constitution, is therefore not law, but utterly void, and of no force: that transferring the power of judging any person, who is under the protection of the laws from the courts, to the President of the United States, as is undertaken by the same act concerning aliens, is against the article of the Constitution which provides that “the judicial power of the United States shall be vested in courts, the judges of which shall hold their offices during good behavior”; and that the said act is void for that reason also. And it is further to be noted, that this transfer of judiciary power is to that magistrate of the general government who already possesses all the Executive, and a negative on all Legislative powers.

7. Resolved, That the construction applied by the General Government (as is evidenced by sundry of their proceedings) to those parts of the Constitution of the United States which delegate to Congress a power “to lay and collect taxes, duties, imports, and excises, to pay the debts, and provide for the common defense and general welfare of the United States,” and “to make all laws which shall be necessary and proper for carrying into execution, the powers vested by the Constitution in the government of the United States, or in any department or officer thereof,” goes to the destruction of all limits prescribed to their powers by the Constitution: that words meant by the instrument to be subsidiary only to the execution of limited powers, ought not to be so construed as themselves to give unlimited powers, nor a part to be so taken as to destroy the whole residue of that instrument: that the proceedings of the General Government under color of these articles, will be a fit and necessary subject of revisal and correction, at a time of greater tranquillity, while those specified in the preceding resolutions call for immediate redress.

8th. Resolved, That a committee of conference and correspondence be appointed, who shall have in charge to communicate the preceding resolutions to the Legislatures of the several States: to assure them that this commonwealth continues in the same esteem of their friendship and union which it has manifested from that moment at which a common danger first suggested a common union: that it considers union, for specified national purposes, and particularly to those specified in their late federal compact, to be friendly, to the peace, happiness and prosperity of all the States: that faithful to that compact, according to the plain intent and meaning in which it was understood and acceded to by the several parties, it is sincerely anxious for its preservation: that it does also believe, that to take from the States all the powers of self-government and transfer them to a general and consolidated government, without regard to the special delegations and reservations solemnly agreed to in that compact, is not for the peace, happiness or prosperity of these States; and that therefore this commonwealth is determined, as it doubts not its co-States are, to submit to undelegated, and consequently unlimited powers in no man, or body

9th. Resolved, That the said committee be authorized to communicate by writing or personal conference, at any times or places whatever, with any person or persons who may be appointed by any one or more co-States to correspond or confer with them; and that they lay their proceedings before the next session of Assembly.