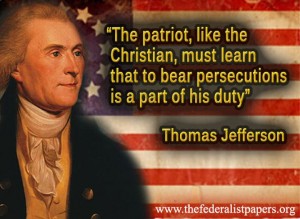 An accumulation of business, which I found on my return here from a short visit to Monticello has prevented till now my acknolegment of your favor of the 14th. This delay has given time to see the result of the contest in your State, & I cannot but congratulate you on the advance it manifests, & the certain prospect it offers that another year restores Massachusetts to the general body of the nation.

You have indeed received the federal unction of lying & slandering. But who has not? Who will ever again come into eminent office, unanointed with this chrism? It seems to be fixed that falsehood & calumny are to be their ordinary engines of opposition; engines which will not be entirely without effect. The circle of characters equal to the first stations is not too large, & will be lessened by the voluntary retreat of those whose sensibilities are stronger than their confidence in the justice of public opinion.

I certainly have known, & still know, characters eminently qualified for the most exalted trusts, who could not bear up against the brutal hackings & hewings of these heroes of Billingsgate. I may say, from intimate knowledge, that we should have lost the services of the greatest character of our country, had he been assailed with the degree of abandoned licentiousness now practiced.

The torture he felt under rare & slight attacks, proved that under those of which the federal bands have shewn themselves capable, he would have thrown up the helm in a burst of indignation. Yet this effect of sensibility must not be yielded to. If we suffer ourselves to be frightened from our post by mere lying, surely the enemy will use that weapon; for what one so cheap to those of whose system of politics morality makes no part?

The patriot, like the Christian, must learn that to bear revielings & persecutions is a part of his duty; and in proportion as the trial is severe, firmness under it becomes more requisite & praiseworthy. It requires, indeed, self-command. But that will be fortified in proportion as the calls for it’s exercise are repeated.

In this I am persuaded we shall have the benefit of your good example. To the other falsehoods they have brought forward, should they add, as you expect, insinuations of any want of confidence in you from the administration generally, or myself particularly, it will, like their other falsehoods, produce in the public mind a contrary inference. No evidence however of that confidence, which I could furnish should be wanting.

An appointment to office would be such. But at present there is no opening for it. No vacancy exists in your own state, and the only office here unfulfilled, has been otherwise tendered, & indeed would be incompatible with the views of your state, which destines you for the most distinguished mark of their affection & confidence, requiring your residence there.

To the nation in general your election will be as gratifying as to that particular state; for never can we consider our union as solid while so important a member as Massachusetts is disaffected. That we may not fail to obtain this accession to our harmony & prosperity, nor you so honorable a testimony of the esteem & approbation of a respectable state, no one prays more sincerely than I do: and with this assurance I tender you my friendly and respectful salutations.