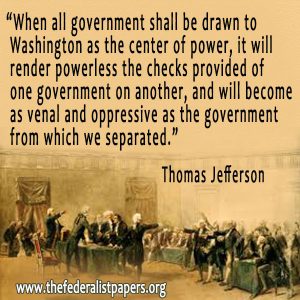 Your favor of the 7th is just now received.  The letter to which it refers was written by me with the sole view of recommending to the study of my fellow citizens a book which I considered as containing more genuine doctrines on the subject of our government, and carrying us back more truly to its fundamental principles, than any one which had been written since the adoption of our Constitution.

As confined to this object, I thought, and still think, its language as plain and intelligible as I can make it.  But when we see inspired writings made to speak whatever opposite controversialists wish them to say, we cannot ourselves expect to find language incapable of similar distortion.  My expressions were general ;  their perversion is in their misapplication to a particular case.

To test them truly, they should turn to the book with whose opinion they profess to coincide.  If the book establishes that a State has no right to tax the moneyed property within its limits, or that it can be called, as a party, to the bar of the federal judiciary, then they may infer that these are my opinions.  If no such doctrines are there, my letter does not authorize their imputation to me.

It has long, however, been my opinion, and I have never shrunk from its expression, (although I do not choose to put it into a newspaper, nor, like a Priam in armor, offer myself its champion,) that the germ of dissolution of our federal government is in the constitution of the federal judiciary ;  an irresponsible body, (for impeachment is scarcely a scare-crow,) working like gravity by night and by day, gaining a little to-day and a little to-morrow, and advancing its noiseless step like a thief, over the field of jurisdiction, until all shall be usurped from the States, and the government of all be consolidated into one.

To this I am opposed;  because, when all government, domestic and foreign, in little as in great things, shall be drawn to Washington as the centre of all power, it will render powerless the checks provided of one government on another, and will become as venal and oppressive as the government from which we separated.  It will be as in Europe, where every man must be either pike or gudgeon, hammer or anvil.

Our functionaries and theirs are wares from the same work-shop;  made of the same materials, and by the same hand.  If the States look with apathy on this silent descent of their government into the gulf which is to swallow all, we have only to weep over the human character formed uncontrollable but by a rod of iron, and the blasphemers of man, as incapable of self-government, become his true historians.

But let me beseech you, Sir, not to let this letter get into a newspaper.  Tranquillity, at my age, is the supreme good of life.  I think it a duty, and it is my earnest wish, to take no further part in public affairs;  to leave them to the existing generation to whose turn they have fallen, and to resign the remains of a decaying body and mind to their protection.

The abuse of confidence by publishing my letters has cost me more than all other pains, and makes me afraid to put pen to paper in a letter of sentiment.  If I have done it frankly in answer to your letter, it is in full trust that I shall not be thrown by you into the arena of a newspaper.  I salute you with great respect.