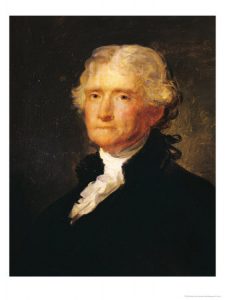 DEAR SIR, On my return from a long journey and considerable absence from home, I found here the copy of your “Enquiry into the principles of our government,” which you had been so kind as to send me; and for which I pray you to accept my thanks. The difficulties of getting new works in our situation, inland and without a single bookstore, are such as had prevented my obtaining a copy before; and letters which had accumulated during my absence, and were calling for answers, have not yet permitted me to give to the whole a thorough reading; yet certain that you and I could not think differently on the fundamentals of rightful government, I was impatient, and availed myself of the intervals of repose from the writing table, to obtain a cursory idea of the body of the work.

I see in it much matter for profound reflection; much which should confirm our adhesion, in practice, to the good principles of our constitution, and fix our attention on what is yet to be made good. The sixth section on the good moral principles of our government, I found so interesting and replete with sound principles, as to postpone my letter-writing to its thorough perusal and consideration.

Besides much other good matter, it settles unanswerably the right of instructing representatives, and their duty to obey. The system of banking we have both equally and ever reprobated. I contemplate it as a blot left in all our constitutions, which, if not covered, will end in their destruction, which is already hit by the gamblers in corruption, and is sweeping away in its progress the fortunes and morals of our citizens.

Funding I consider as limited, rightfully, to a redemption of the debt within the lives of a majority of the generation contracting it; every generation coming equally, by the laws of the Creator of the world, to the free possession of the earth he made for their subsistence, unincumbered by their predecessors, who, like them, were but tenants for life.

You have successfully and completely pulverized Mr. Adams’ system of orders, and his opening the mantle of republicanism to every government of laws, whether consistent or not with natural right. Indeed, it must be acknowledged, that the term republic is of very vague application in every language. Witness the self-styled republics of Holland, Switzerland, Genoa, Venice, Poland. 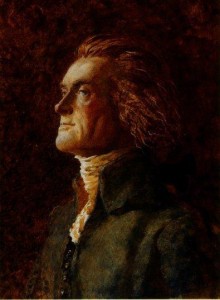 Were I to assign to this term a precise and definite idea, I would say, purely and simply, it means a government by its citizens in mass, acting directly and personally, according to rules established by the majority; and that every other government is more or less republican, in proportion as it has in its composition more or less of this ingredient of the direct action of the citizens. Such a government is evidently restrained to very narrow limits of space and population. I doubt if it would be practicable beyond the extent of a New England township.

The first shade from this pure element, which, like that of pure vital air, cannot sustain life of itself, would be where the powers of the government, being divided, should be exercised each by representatives chosen either pro hac vice, or for such short terms as should render secure the duty of expressing the will of their constituents. This I should consider as the nearest approach to a pure republic, which is practicable on a large scale of country or population. And we have examples of it in some of our States constitutions, which, if not poisoned by priest-craft, would prove its excellence over all mixtures with other elements; and, with only equal doses of poison, would still be the best.

Other shades of republicanism may be found in other forms of government, where the executive, judiciary and legislative functions, and the different branches of the latter, are chosen by the people more or less directly, for longer terms of years or for life, or made hereditary; or where there are mixtures of authorities, some dependent on, and others independent of the people. The further the departure from direct and constant control by the citizens, the less has the government of the ingredient of republicanism; evidently none where the authorities are hereditary, as in France, Venice, &c., or self-chosen, as in Holland; and little, where for life, in proportion as the life continues in being after the act of election.

The purest republican feature in the government of our own State, is the House of Representatives. The Senate is equally so the first year, less the second, and so on. The Executive still less, because not chosen by the people directly. The Judiciary seriously anti-republican, because for life; and the national arm wielded, as you observe, by military leaders irresponsible but to themselves. Add to this the vicious constitution of our county courts (to whom the justice, the executive administration, the taxation, police, the military appointments of the county, and nearly all our daily concerns are confided), self-appointed, self-continued, holding their authorities for life, and with an impossibility of breaking in on the perpetual succession of any faction once possessed of the bench.

They are in truth, the executive, the judiciary, and the military of their respective counties, and the sum of the counties makes the State. And add, also, that one half of our brethren who fight and pay taxes, are excluded, like Helots, from the rights of representation, as if society were instituted for the soil, and not for the men inhabiting it; or one half of these could dispose of the rights and the will of the other half, without their consent.

“What constitutes a State?
Not high-raised battlements, or labor’d mound,
Thick wall, or moated gate;
Not cities proud, with spires and turrets crown’d;
No: men, high minded men;
Men, who their duties know;
But know their rights; and knowing, dare maintain.
These constitute a State.”

In the General Government, the House of Representatives is mainly republican; the Senate scarcely so at all, as not elected by the people directly, and so long secured even against those who do elect them; the Executive more republican than the Senate, from its shorter term, its election by the people, in practice, (for they vote for A only on an assurance that he will vote for B,) and because, in practice also, a principle of rotation seems to be in a course of establishment; the judiciary independent of the nation, their coercion by impeachment being found nugatory. If, then, the control of the people over the organs of their government be the measure of its republicanism, and I confess I know no other measure, it must be agreed that our governments have much less of republicanism than ought to have been expected; in other words, that the people have less regular control over their agents, than their rights and their interests require. And this I ascribe, not to any want of republican dispositions in those who formed these constitutions, but to a submission of true principle to European authorities, to speculators on government, whose fears of the people have been inspired by the populace of their own great cities, and were unjustly entertained against the independent, the happy, and therefore orderly citizens of the United States.

Much I apprehend that the golden moment is past for reforming these heresies. The functionaries of public power rarely strengthen in their dispositions to abridge it, and an unorganized call for timely amendment is not likely to prevail against an organized opposition to it. We are always told that things are going on well; why change them? “Chi sta bene, non si muove,” said the Italian, “let him who stands well, stand still.” This is true; and I verily believe they would go on well with us under an absolute monarch, while our present character remains, of order, industry and love of peace, and restrained, as he would be, by the proper spirit of the people. But it is while it remains such, we should provide against the consequences of its deterioration. And let us rest in the hope that it will yet be done, and spare ourselves the pain of evils which may never happen.

On this view of the import of the term republic, instead of saying, as has been said, “that it may mean anything or nothing,” we may say with truth and meaning, that governments are more or less republican as they have more or less of the element of popular election and control in their composition; and believing, as I do, that the mass of the citizens is the safest depository of their own rights, and especially, that the evils flowing from the duperies of the people, are less injurious than those from the egoism of their agents, I am a friend to that composition of government which has in it the most of this ingredient. And I sincerely believe, with you, that banking establishments are more dangerous than standing armies; and that the principle of spending money to be paid by posterity, under the name of funding, is but swindling futurity on a large scale.

I salute you with constant friendship and respect. 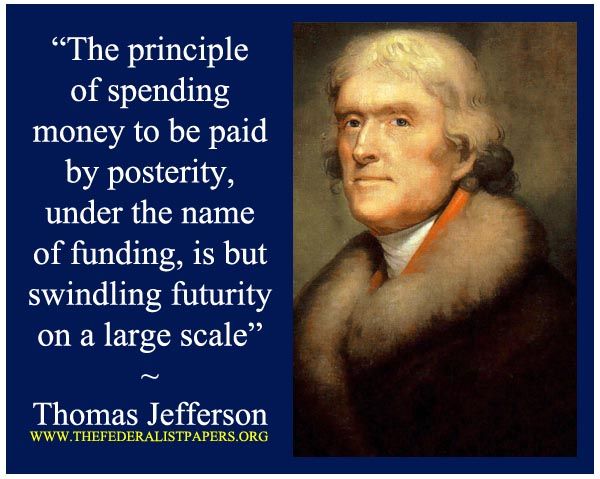