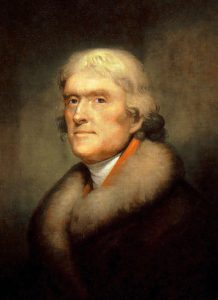 I am now to acknowledge the receipt of your favors of October the 4th, 8th, & 26th. In the last you apologize for your letters of introduction to Americans coming here. It is so far from needing apology on your part, that it calls for thanks on mine. I endeavor to shew civilities to all the Americans who come here, & will give me opportunities of doing it: and it is a matter of comfort to know from a good quarter what they are, & how far I may go in my attentions to them.

Can you send me Woodmason’s bills for the two copying presses for the M. de la Fayette, & the M. de Chastellux? The latter makes one article in a considerable account, of old standing, and which I cannot present for want of this article.—I do not know whether it is to yourself or Mr. Adams I am to give my thanks for the copy of the new constitution. I beg leave through you to place them where due. It will be yet three weeks before I shall receive them from America. There are very good articles in it: & very bad. I do not know which preponderate.

What we have lately read in the history of Holland, in the chapter on the Stadtholder, would have sufficed to set me against a chief magistrate eligible for a long duration, if I had ever been disposed towards one: & what we have always read of the elections of Polish kings should have forever excluded the idea of one continuable for life. Wonderful is the effect of impudent & persevering lying. The British ministry have so long hired their gazetteers to repeat and model into every form lies about our being in anarchy, that the world has at length believed them, the English nation has believed them, the ministers themselves have come to believe them, & what is more wonderful, we have believed them ourselves.

Yet where does this anarchy exist? Where did it ever exist, except in the single instance of Massachusetts? And can history produce an instance of rebellion so honorably conducted? I say nothing of it’s motives. They were founded in ignorance, not wickedness. God forbid we should ever be 20 years without such a rebellion.

The people cannot be all, & always, well informed. The part which is wrong will be discontented in proportion to the importance of the facts they misconceive. If they remain quiet under such misconceptions it is a lethargy, the forerunner of death to the public liberty. We have had 13. states independent 11. years. There has been one rebellion. That comes to one rebellion in a century & a half for each state.

What country before ever existed a century & half without a rebellion? & what country can preserve it’s liberties if their rulers are not warned from time to time that their people preserve the spirit of resistance? Let them take arms. The remedy is to set them right as to facts, pardon & pacify them. What signify a few lives lost in a century or two?The tree of liberty must be refreshed from time to time with the blood of patriots & tyrants. It is it’s natural manure.

Our Convention has been too much impressed by the insurrection of Massachusetts: and in the spur of the moment they are setting up a kite to keep the hen-yard in order. I hope in God this article will be rectified before the new constitution is accepted.

You ask me if any thing transpires here on the subject of S. America? Not a word. I know that there are combustible materials there, and that they wait the torch only. But this country probably will join the extinguishers.—The want of facts worth communicating to you has occasioned me to give a little loose to dissertation. We must be contented to amuse, when we cannot inform.