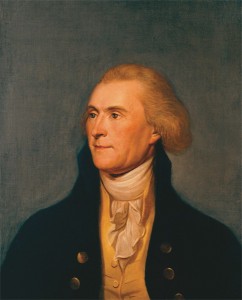 —I am indebted for your favor of February 25th, and especially for your friendly indulgence to my excuses for retiring from the polemical world. I should not shrink from the post of duty, had not the decays of nature withdrawn me from the list of combatants. Great decline in the energies of the body import naturally a corresponding wane of the mind, and a longing after tranquillity as the last and sweetest asylum of age.

It is a law of nature that the generations of men should give way, one to another, and I hope that the one now on the stage will preserve for their sons the political blessings delivered into their hands by their fathers. Time indeed changes manners and notions, and so far we must expect institutions to bend to them. But time produces also corruption of principles, and against this it is the duty of good citizens to be ever on the watch, and if the gangrene is to prevail at last, let the day be kept off as long as possible.

We see already germs of this, as might be expected. But we are not the less bound to press against them. The multiplication of public offices, increase of expense beyond income, growth and entailment of a public debt, are indications soliciting the employment of the pruning-knife; and I doubt not it will be employed; good principles being as yet prevalent enough for that.

The great object of my fear is the federal judiciary. That body, like gravity, ever acting, with noiseless foot, and unalarming advance, gaining ground step by step, and holding what it gains, is ingulphing insidiously the special governments into the jaws of that which feeds them. The recent recall to first principles, however, by Colonel Taylor, by yourself, and now by Alexander Smith, will, I hope, be heard and obeyed, and that a temporary check will be effected. Yet be not weary of well doing. Let the eye of vigilance never be closed.

Last and most portentous of all is the Missouri question. It is smeared over for the present; but its geographical demarcation is indelible. What it is to become, I see not; and leave to those who will live to see it. The University will give employment to my remaining years, and quite enough for my senile faculties. It is the last act of usefulness I can render, and could I see it open I would not ask an hour more of life. To you I hope many will still be given; and, certain they will all be employed for the good of our beloved country, I salute you with sentiments of especial friendship and respect.