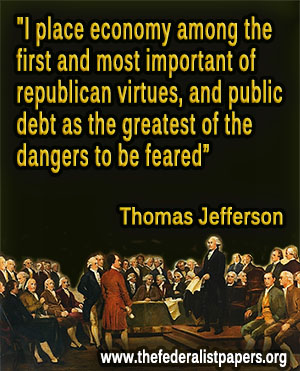 I thank you, Sir, for the copy you have been so good as to send me, of your late speech to the legislature of your State, which I have read a second time with great pleasure, as I had before done in the public papers. It is replete with sound principles, and truly republican.

Some articles, too, are worthy of peculiar notice. The idea that institutions established for the use of the nation cannot be touched nor modified, even to make them answer their end, because of rights gratuitously supposed in those employed to manage them in trust for the public, may perhaps be a salutary provision against the abuses of a monarch, but is most absurd against the nation itself.

Yet our lawyers and priests generally inculcate this doctrine, and suppose that preceding generations held the earth more freely than we do; had a right to impose laws on us, unalterable by ourselves, and that we, in like manner, can make laws and impose burdens on future generations, which they will have no right to alter; in fine, that the earth belongs to the dead and not the living.

I remark also the phenomenon of a chief magistrate recommending the reduction of his own compensation. This is a solecism of which the wisdom of our late Congress cannot be accused. I, however, place economy among the first and most important of republican virtues, and public debt as the greatest of the dangers to be feared.

What will you do when the worst crisis in American history hits? CLICK HERE to find out what you can do to survive

We see in England the consequences of the want of it, their laborers reduced to live on a penny in the shilling of their earnings, to give up bread, and resort to oatmeal and potatoes for food; and their landholders exiling themselves to live in penury and obscurity abroad, because at home the government must have all the clear profits of their land.

In fact, they see the fee simple of the island transferred to the public creditors, all its profits going to them for the interest of their debts. Our laborers and landholders must come to this also, unless they severely adhere to the economy you recommend. I salute you with entire esteem and respect.