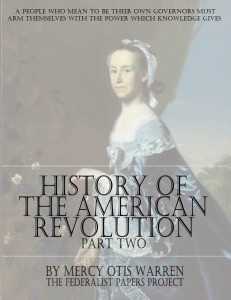 The progress of the American Revolution has been so rapid, and such the alteration of manners, the blending of characters, and the new train of ideas that almost universally prevail, that the principles which animated to the noblest exertions have been nearly annihilated.

Many who first stepped forth in vindication of the rights of human nature are forgotten, and the causes which involved the thirteen colonies in confusion and blood are scarcely known, amidst the rage of accumulation and the taste for expensive pleasures that have since prevailed; a taste that has abolished that mediocrity which once satisfied, and that contentment which long smiled in every countenance. Luxury, the companion of young acquired wealth, is usually the consequence of opposition to, or close connection with, opulent commercial states.

Thus the hurry of spirits, that ever attends the eager pursuit of fortune and a passion for splendid enjoyment, leads to forgetfulness; and thus the inhabitants of America cease to look back with due gratitude and respect on the fortitude and virtue of their ancestors, who, through difficulties almost insurmountable, planted them in a happy soil.

But the historian and the philosopher will ever venerate the memory of those pious and independent gentlemen, who, after suffering innumerable impositions, restrictions, and penalties, less for political, than theological opinions, left England, not as adventurers for wealth or fame, but for the quiet enjoyment of religion and liberty.

The love of domination and an uncontrolled lust of arbitrary power have prevailed among all nations, and perhaps in proportion to the degrees of civilization. They have been equally conspicuous in the decline of Roman virtue, and in the dark pages of British story.