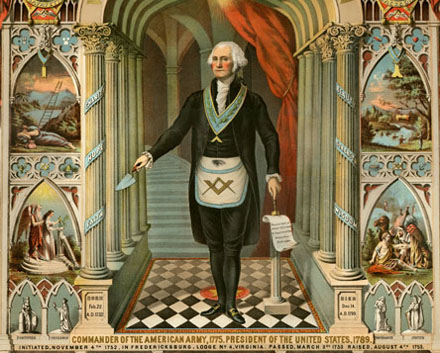 I was recently confronted with a quote from a gentleman named Marshall Dean who presented an address at Washington’s Centennial Memorial in 1899 claiming that Washington was a devout Mason.  In that speech, Mr. Dean claimed that:

in a letter addressed in November, 1798, only thirteen months before his death, to the Grand Lodge of Maryland he has made this explicit declaration of his opinion of the Institution: “So far as I am acquainted with the doctrines and principles of Freemasonry, I conceive them to be founded in benevolence, and to be exercised only for the good of mankind. I cannot, therefore, upon this ground, withdraw my approbation from it.”

Mr. Dean was partly correct in saying that Washington wrote a letter containing the above phrase.  The letter which he referenced is one of only five letters that Washington wrote to Masons for which we have an original copy in Washington’s own handwriting.  However, there is a great deal about this letter that Mr. Dean conveniently left out of his speech.

First, it is important to note that this letter was essentially a thank you note which Washington sent to the Maryland lodge in response to a gift that they had sent him upon his acceptance of the Presidency.  It is very rude to say anything negative in a thank you note, and Washington was well known for his cordiality.  We would never expect to find Washington condemning Masonry in a letter thanking the Masons for a gift.

A second point which Mr. Dean neglected to mention is the fact that the original draft of this letter differed considerably from the version which was actually sent to the Maryland lodge and eventually quoted by Mr. Dean.  The original draft reads as follows:

So far as I am acquainted with the principles & Doctrines of Free Masonry, I conceive it to be founded in benevolence and to be exercised only for the good of mankind.  If it has been a Cloak to promote improper or nefarious objects, it is a melancholly proof that in unworthy hands, the best institutions may be made use of to promote the worst designs.

This draft shows that Washington had a much different view of Masonry than most people are aware of.  He viewed Masonry as an institution which had been founded with very noble goals but which had subsequently been co-opted and used for “nefarious” purposes.  Washington apparently considered this language to be too harsh for a thank you note, and the second sentence was crossed out.  In its place, Washington substituted: “Upon this ground, I could not withdraw my approbation of it.”

When we consider the implications of the sentence that Washington crossed out, it becomes clear that he did not intend to convey the ideas which Mr. Dean drew from this letter.  According to Mr. Dean, this letter shows Washington’s “sincere attachment to our Order, and that Washington was in very truth a Mason in heart.”  In reality, however, this letter demonstrates that, by this point in his life, Washington had become suspicious of the Masons, but he was too polite to mention those suspicions in a letter thanking the Masons for a generous gift.

At this point, we should consider a third fact which Mr. Dean excerpted from his presentation, and that is the fact that the gift from the Maryland lodge was “a copy of the Constitutions of Masonry.”  It was immediately after his acknowledgement of this gift that Washington wrote “So far as I am acquainted with the principles & Doctrines of Free Masonry…”  Washington did not write, “I am well acquainted with the principles & Doctrines of Free Masonry…” which is what we would expect from the supposed grand master.  Rather, he spoke of those doctrines as if he were uncertain of their exact nature.  He conceived them to be founded in benevolence but only so far as he was acquainted with them.  This is not the language of a committed, lifelong member of the Masonic fraternity.  But it is what we would expect from someone who had hardly even set foot inside a lodge for more than thirty years as Washington admitted in a letter to G. W. Snyder dated just a month and a half prior to the one cited by Mr. Dean.  In that letter, Washington wrote: 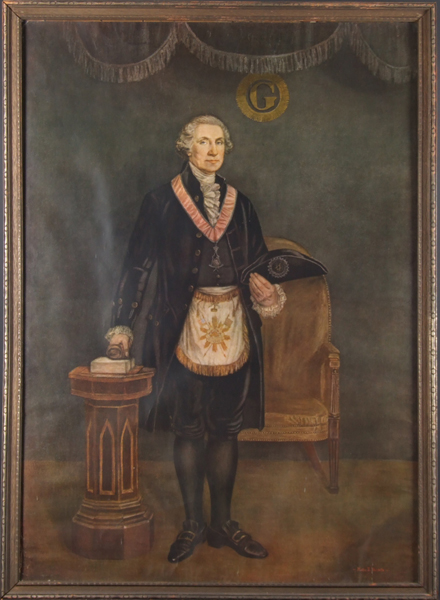 I have heard much of the nefarious and dangerous plan and doctrines of the Illuminati, but never saw the book until you were pleased to send it to me.  The same causes which have prevented my acknowledging the receipt of your letter, have prevented my reading the book hitherto; namely, the multiplicity of matters which pressed upon me before, and the debilitated state in which I was left, after a severe fever had been removed, and which allows me to add little more now than thanks for your kind wishes and favorable sentiments, except to correct an error you have run into, of my presiding over the English Lodges in this country.  The fact is I preside over none, nor have I been in one more than once or twice within the last thirty years.  I believe, notwithstanding, that none of the Lodges in this country are contaminated with the principles ascribed to the society of the Illuminati.

Mr. Snyder responded by informing Washington that he was personally aware of Illuminati infiltration in Masonic lodges in America, and on October 24, 1798, just fourteen days before the letter to the Maryland lodge, Washington wrote again to Mr. Snyder to inform him that his previous statements about the Masons had been too soft.  In this second letter, Washington wrote:

Revd Sir: I have your favor of the 17th. instant before me; and my only motive to trouble you with the receipt of this letter, is to explain, and correct a mistake which I perceive the hurry in which I am obliged, often, to write letters, have led you into.

It was not my intention to doubt that, the Doctrines of the Illuminati, and principles of Jacobinism had not spread in the United States. On the contrary, no one is more truly satisfied of this fact than I am.

The idea that I meant to convey, was, that I did not believe that the Lodges of Free Masons in this Country had, as Societies, endeavoured to propagate the diabolical tenets of the first, or pernicious principles of the latter (if they are susceptible of seperation). That Individuals of them may have done it, or that the founder, or instrument employed to found, the Democratic Societies in the United States, may have had these objects; and actually had a seperation of the People from their Government in view, is too evident to be questioned.

These letters provide us with a confirmation of the above observations regarding the letter to the Maryland lodge.  In the letters to Mr. Snyder, we can see that Washington is well aware of a “nefarious” plan by the Illuminati to infect the Masonic lodges with their dangerous doctrines.  This was likely the very same “nefarious” plan which Washington referenced in his original draft of the Maryland letter, and Washington’s admission to Mr. Snyder that he had not been in a Masonic lodge more than twice in the preceding thirty years explains Washington’s lack of confidence in his knowledge of the doctrines and principles of Masonry.