New York City has been beset by a series of antisemitic attacks against Jewish people in, and around, the city in recent weeks.

This got worse on Saturday with a machete attack on Jewish worshippers at a Hanukah celebration when a man broke into the house and stabbed several guests.

After the Saturday attack Democrats, including New York City Mayor Bill de Blasio, blamed President Donald Trump for the attacks committed by black suspects in one of the most liberal cities in the nation.

“We are in a crisis right now,” de Blasio said on Fox News. “What we’re seeing is a growth of anti-Semitism in this country that is profoundly dangerous. It is happening in Europe as well.”

“An atmosphere of hate has been developing in this country over the last few years. A lot of it is emanating from Washington and it’s having an effect on all of us,” the mayor said.

Really Mayor de Blasio? Because it was your bail reform that is allowing people committing these heinous attacks out of jail free, The New York Post reported.

Suspects arrested in last week’s spree of eight anti-Semitic attacks are being quickly released right back into the neighborhoods they terrorized thanks to “bail reform” legislation — which doesn’t even take effect until Jan. 1.

The most recent case of revolving-door justice came Saturday morning, with the release, with no bail, of a woman charged with punching and cursing at three Orthodox women, ages 22, 26 and 31, in Crown Heights, Brooklyn at dawn the day before.

The accused assailant, Tiffany Harris, was hauled in handcuffs before a Brooklyn judge on 21 menacing, harassment and attempted assault charges.

“F-U, Jews!” Harris shouted at the victims during the attack. And the worst part is, when questioned by police, she admitted it and they still let her go.

“Yes, I was there,” she said to the police, the criminal complaint said. “Yes, I slapped them. I cursed them out. I said ‘F-U, Jews.”

Harris has an open harassment and assault case from 2018 and was sentenced to no jail time for felony criminal mischief after she even missed several court dates.

The prosecutors in this recent case did not even bother to request bail because they know that criminals are now running the show in New York City.

“The de Blasio administration has made it clear that we all need to get into compliance with bail reform now,” a source said. “If prosecutors had asked for bail, corrections would release them immediately.”

“You have to beat the hell out of somebody — or murder them — for there to be any consequences,”

“It’s open season in New York — open season on innocent people. On Jews, on Muslims, on gay people. It applies to anybody. But it’s the Jewish people in particular who have been targeted,” he said.

New York is going back to the high crime days of the 1970s and 1980s and it is because this mayor does not want to punish criminals.

On Thursday Steven Haynes, 40, sucker punched a New York City police officer, pinned him to the ground and was arrested on felony assault charges.

He was released hours after the attack with no bail and by Sunday he was back in the same spot where he attacked the police, panhandling again.

“No bail. Three hours, he was back in the same spot,” general manager of a restaurant near the scene, Michael Vitiello, said. “They had a cop sitting there, just watching him. He got his own security ‘cuz he’s a celebrity now.”

“They could have locked him up in Bellevue last night, but they didn’t do it,” he said. “Now he’s back in the street causing problems.”

Even another panhandler on the same street was furious that Haynes had been set free.

“I’m dumbfounded,” the man, Jesus, 28, said. “If it was me I would still be in jail. I’m coherent. I don’t have any mental problems — but that should not be justification for hitting a cop.”

“Now he’s starting to spit at people, started to curse people out,” he said. “The other day he went at the delivery guy like, ‘why you always around me?’” 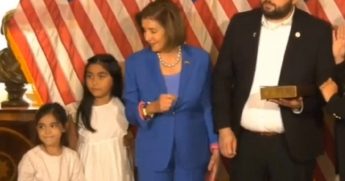 Video: Was Pelosi Actually Violent? Pelosi Gets Physical With Little Girl Who Got Too Close During Photo-Op