The Associated Press used to be the gold standard of news reporting around the world. Not any more.

They are now little more than a propaganda arm of the DNC incapable, at least in the case of President Trump, of doing some basic fact checking.

The AP’s partisan hatred of the President has become so blatant, that they don’t even bother with facts anymore.

They simply make things up:

On Halloween, the AP ran a story with this headline (screen grab below): “President Trump’s first 3 children received birthright citizenship.” 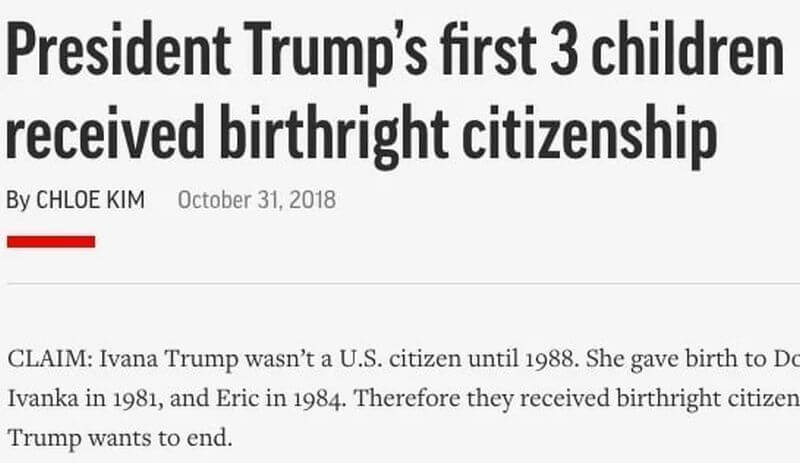 In the original story, the first paragraph said this: “CLAIM: Ivana Trump wasn’t a citizen until 1988. She gave birth to Don Jr. in 1977, Ivanka in 1981 and Eric in 1984. Therefore they received birthright citizenship, which Trump wants to end.”

As background, Trump has announced he plans to end the “ridiculous” policy that grants automatic citizenship rights of children born in the U.S. to illegal immigrants or non-citizens. In an interview with Axios, Trump said “We’re the only country in the world where a person comes in and has a baby, and the baby is essentially a citizen of the United States… with all of those benefits. It’s ridiculous. It’s ridiculous. And it has to end.”

Almost immediately, the claim that some of his children were granted birthright citizenship emerged on social media.

The AP piece was part of a new program the wire service is doing jointly with Facebook. “The Associated Press reviewed this story after it was surfaced to third-party fact checkers as part of an initiative with Facebook to assess the accuracy of news content.”

Yes, the fact-checkers got the facts wrong.

The AP ultimately, sort of, corrected the story, but their bias is still glaringly apparent:

At some later point, the AP changed the headline. “President Trump’s first 3 children did not receive birthright citizenship,” read the new headline. And the AP added this: “CORRECTION: The headline on this story has been corrected to show that Trump’s first three children did not receive birthright citizenship.”

But even in the corrected version, the AP deems the claim is a “mixture” of fact and fiction.

AP’S ASSESSMENT: Mixture. It’s true that Ivana Trump was not a citizen until 1988, but the father of her children was a U.S. citizen and there would have been no special status needed to make them citizens.

Now, if you can understand how this is a “mixture” you’re much smarter than we are. It says very clearly that there was “no special status needed to make them citizens,” so how is that a mixture?

Give me a break!

So much for the gold standard of news reporting.

This is why people now trust used car and snake oil salesmen much more than they trust AP reporters.