Christine Blasey Ford, the woman who leveled sexual assault charges against Supreme Court Justice Brett Kavanaugh, is still at it.

On Friday, Halloween of all days, she received an empowerment award at an event in California, where Sen. Kamala Harris called for another investigation into Justice Kavanaugh.

Ford, whose charges against Kavanaugh were not proven or corroborated after several investigations, received a standing ovation, The Washington Times reported.

“Receiving this award is particularly meaningful because of what you all do to support survivors of sexual violence,” Blasey Ford said.

“There are many, many people who aren’t as lucky as I am. When my family was forced out of our home last year, we had resources and we had friends who made sure that we had safe places to go and stay. So many women do not,” she said.

“It’s funny, I was inspired by Anita Hill when I was deciding whether to testify, but it didn’t occur to me at the time that I would be inspiring anyone else.”

“I was focused on telling the U.S. Senate what had happened to me,” the 53-year-old professor said to the crowd.

“I simply thought it was my duty as a citizen and that anyone in my position would do the same thing,” she said.

“Everyone has the power to inspire others,” Blasey Ford said. “Be courageous, stand strong, be yourself.”

There is still no proof that anything happened to Blasey Ford at the hands of Justice Kavanaugh, but that did not stop Sen. Harris from using her appearance to attack him again.

“Dr. Christine Blasey Ford is a true profile in courage,” Harris, whose campaign is in a free fall, said in a tweet.

“Meanwhile, Brett Kavanaugh’s seat on the Supreme Court continues to be a stain on our justice system. I’ve called for a House investigation into Kavanaugh,” she said.

Dr. Christine Blasey Ford is a true profile in courage.

Meanwhile, Brett Kavanaugh’s seat on the Supreme Court continues to be a stain on our justice system. I’ve called for a House investigation into Kavanaugh. pic.twitter.com/xJC822N9P4

As a former prosecutor who was an officer of the court you would think that Sen. Harris would believe in due process, not slander.

But when your presidential campaign is falling like a boulder off of a cliff you do anything in your power to keep your name in the news. 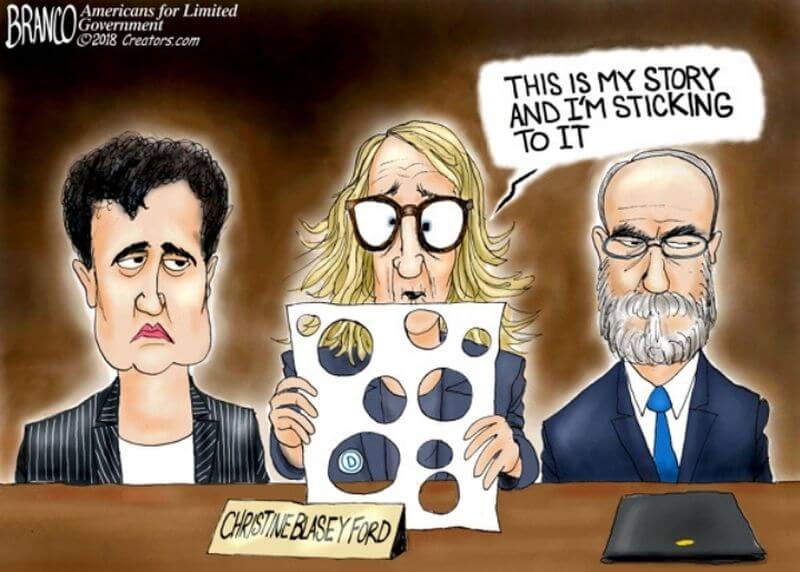 Carmine Sabia
Carmine Sabia Jr started his own professional wrestling business at age 18 and went on to become a real estate investor. Currently he is a pundit who covers political news and current events.
Once Again Obama Sticks His Nose Into The 2020 Election, But Not For Biden, Endorses Down Ballot Candidates
Joe Biden Has His Fellow Democrats Furious As The Competition To Be His Running Mate Continues
Jim Acosta Just Got Shredded By His Own Colleague In New Book, ABC Reporter Karl Says Acosta Acts Like Opposition Party
Biden, Dems Have Found a Creative New Way To Mess With The Election, They're Calling For Virtual Voting
‘Are You Working For CNN?’ Trump Goes Off On Fox News Reporter For Parroting Democrat Talking Points
See more...