The cartoon below shows exactly how Supreme Court nominee Judge Brett Kavanaugh must feel right now after being ambushed by Democrats.

Savage, but most likely accurate: 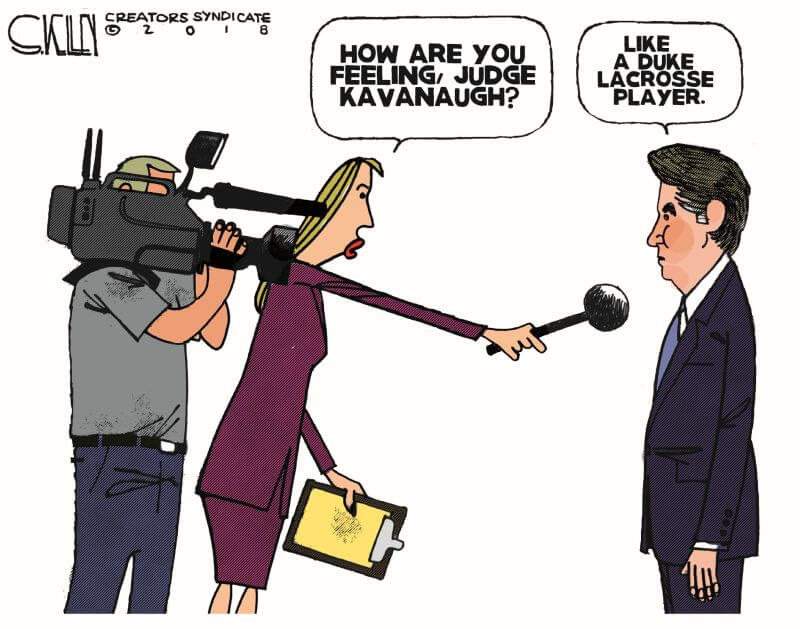 Sadly, does that about sum it up?

The judge must feel like he’s being railroaded, similar to the infamous Duke La-Cross case.

A coalition of left-wing activist organizations including Women’s March, the Center for Popular Democracy (CPD) and Housing Works have scheduled the near-constant disruptions at the Kavanaugh hearings as part of an organized effort to derail the confirmation process in a series of meetings since he was first nominated.

The cash from the donor-funded groups goes toward the protesters’ post-and-forfeit payments — a small cash sum paid to resolve low-level misdemeanor crimes and avoid jail time.

Those are just some of the details representatives from the three groups revealed in a Monday night conference call planning their next two anti-Kavanaugh protests, one on Thursday and one next Monday.

The Daily Caller News Foundation received a tip with the dial-in code for Monday’s conference call and was present on the call in its entirety. One reporter, who asked questions, revealed his name during the introductions portion of the meeting.

Protesters only need a government-issued ID and “your cash for the post-and-forfeit,” CPD national field organizer Darius Gordon said on the call.

The left-wing organizations would provide cash for the post-and-forfeits to protesters who didn’t show up with their own money, Gordon and another organizer, Housing Works national advocacy coordinator Paul Davis, both said on Monday’s call.

“If you do not have access to your cash we will certainly be able to arrange to get it to you before the action,” Davis said, noting that they had done so at previous anti-Kavanaugh protests.

The Senate Committee on the Judiciary postponed Kavanaugh’s confirmation vote, previously scheduled for Thursday, after Palo Alto University professor Christine Blasey Ford accused Kavanaugh of drunkenly trying to force himself on her at a party when they were in high school. 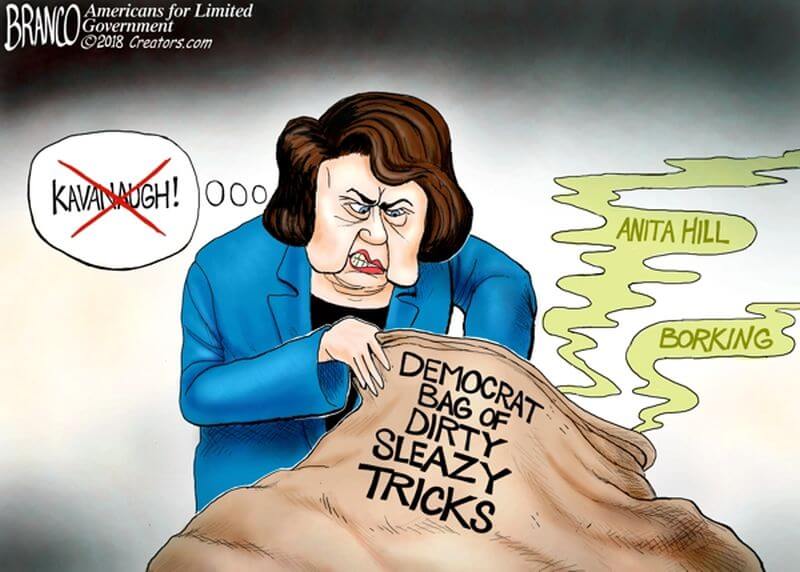 Kavanaugh has firmly denied the allegation.

The left-wing activists on Monday’s call aim to go beyond delaying Kavanaugh’s confirmation and kill it altogether.

“Postponement isn’t enough,” Bland said, describing the allegation against Kavanaugh as “an incredible revelation.” Bland believes there is a “30 percent” chance Kavanaugh’s nomination will be withdrawn or voted down.

Because Kavanaugh no longer has a hearing on Thursday, the left-wing protesters are instead going to target a confirmation hearing for lower court nominees, who Davis described as “other gross judges” who are even more radical.

Disrupting the hearings were constantly described throughout the call as acts of “civil disobedience” by organizers.

The three organizers, who took turns speaking throughout the call, explained that protesters should expect to pay up to $50 per arrest at Thursday and Monday’s hearings.

The activists said they will have cash ready for would-be disrupters on Thursday and Monday, as they did when disrupting the previous hearings.

Some protesters disrupted the earlier hearings multiple times in the same day. Once released from police custody, the protesters jumped back into line for the same hearings they had just interrupted, the organizers noted on Monday’s call.

One woman on the call said she was arrested three times in one day for disrupting the Kavanaugh hearings.

At least one lawyer on retainer would be present outside Capitol Hill to provide free legal advice for individuals facing charges.

Women’s March leader Linda Sarsour was arrested at the Sept. 4 hearing and was spotted back in the Hart Senate building just hours later.

Some individuals on the call shared concerns about rumors about a supposed Metropolitan Police Department policy where a third arrest could mean that a protester could be held in jail for 24 hours, thus halting repeated disruptions by the same person.

Yet when organizers on the call were pressed, no one could say for sure about whether the alleged policy would be followed either Thursday or Monday. Nor could they even confirm its existence.

Some Kavanaugh supporters at the earlier hearings first said they witnessed CPD activists handing out cash to protesters, which they said proved that the protesters were paid for their efforts.

Other Senate staffers told TheDCNF that rumors had been circulating since the beginning of the hearing that protesters were receiving some kind of compensation.

The protesters did receive cash, but it was to cover the post-and-forfeits, rather than payment for their time.

Organizers, in response to a DCNF reporter on the call, said no extra money would be provided to individuals who took time off work or who needed bail for unrelated crimes.

TheDCNF repeatedly reached out to CPD before Monday’s conference call for clarification on the cash transfers, but received no answer.

Organizers on the call also discussed the potential of using children in the protests, which could possibly lead to arrests. That plan has been put on hold for now.

Billionaire George Soros, who uses a network of nonprofits to advance his left-wing political ideology on a global scale, is a primary source of funding for CPD.

Tom Steyer, another Democratic billionaire and possible 2020 presidential candidate, is also listed as providing funds to groups organizing the protests.

The three activists groups did not immediately respond to TheDCNF’s request for comment after the conference call.