The cartoon below, by master cartoonist Michael Ramirez, shows EXACTLY what Democrats mean when they claim they’re willing to compromise with Republicans. 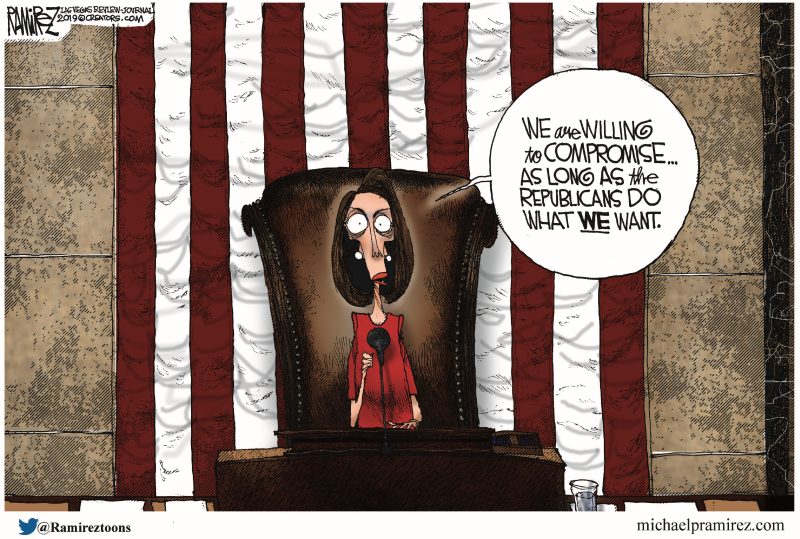 What Democrats mean when they say they want to compromise with Republicans is they expect to get their way, and for Republicans to cave.

Of course why wouldn’t they think that when the GOP has a long history of giving Democrats EXACTLY what they want.

Even when Republicans control everything.

Speaking of being bi-partisan:

It is going to be war between Republicans and Democrats over the border wall and the government shutdown.

That was apparent when Sen. Lindsey Graham appeared on CBS’ “Face The Nation” and fired back at House Speaker Rep. Nancy Pelosi who fired the first shot.

Margaret Brenan was hosting the show and asked the senator if he had spoken to President Donald Trump about the shutdown.

“It was pretty clear to me that we’re never going to have a deal unless we get a wall as part of it,” he said of the president’s position.

“As long as the radical left is in charge we’re never going to get anywhere. The president will compromise but he will not capitulate. So that’s where we’re at,” he said.

Graham was responding to what Pelosi had said last week when she declared that she would give the president one dollar for the wall.

The childish statement must have really angered Graham as he kept talking about it.

“Nancy Pelosi has made progress. She’s gone from not a penny to a dollar. Nancy Pelosi sees the border crisis as manufactured. President Trump sees it as real,” Graham said.

“Until we see the same movie you’re never going to reach a conclusion. The president is right to dig in to get money for a wall as part of border security. It will not be a concrete wall it will be steel barriers,” he said.

Brenan then asked Graham why he thinks Republicans are not able to negotiate with the Democrats and he, again, mentioned what Pelosi said.

“Why would you negotiate with somebody who calls you a racist if you want a wall? Who gives you a dollar for a wall when the Democratic Party supported twenty five billion dollars in the past? We’re not going to negotiate with people who see the world this way,” he said.

Brenan went on to ask Graham why the Coast Guard is not being paid and he went off again.

When Brenan asked if the president was willing to negotiate with something like DACA for the money for the wall and Graham again went back to the comment.

And he mentioned it one more time.

“When you see Dick Durbin and others in the room not a bunch of staffers. When you see this rhetoric that those who want to build a wall are racists stop. When you see the idea one dollar is enough for the wall. When that stuff ends, the real negotiations begin,” he said.

In other words be an adult Nancy.