The cartoon below, by master cartoonist A.F. Branco, brutally sums up Democrats recount efforts in both Florida and Georgia.

This really says it all: 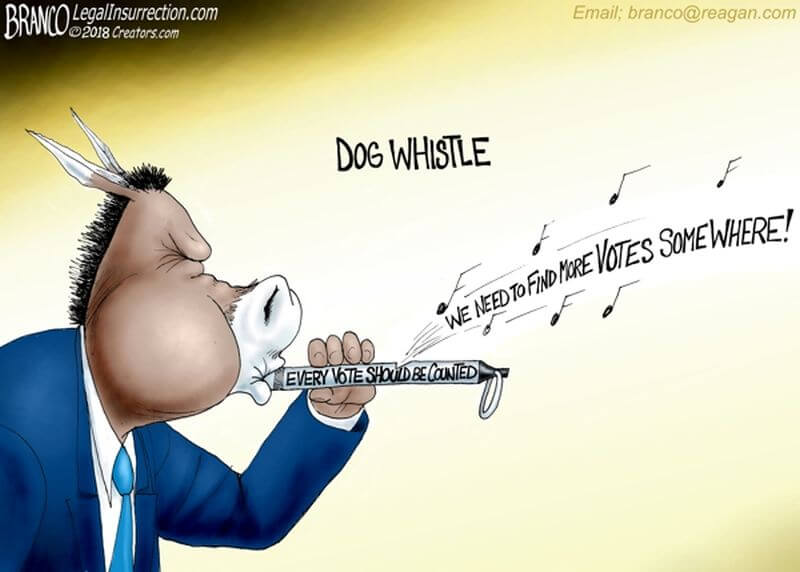 Democrats motto might as well be, “if you can’t beat them, cheat them.”

The Hill is reporting that Democrat candidate for Governor in Georgia, Stacey Abrams, is filing a new lawsuit to force a run off with Brian Kemp.

This is nothing more than a new attempt to steal an election won by the Republican:

In the lawsuit, filed Sunday, Abrams is seeking to block two counties from rejecting absentee ballots with minor mistakes, according to The Washington Post.

Abrams has not yet conceded the election, though Republican Brian Kemp has declared victory.

Kemp holds a lead of fewer than 59,000 votes with 100 percent of precincts reporting, but Abrams’ campaign maintains that there are enough uncounted ballots to trigger a runoff election.

A runoff would be required if Kemp’s percentage of the vote falls below 50 percent. His vote total is now at 50.3 percent.

The lawsuit also asks county officials to count provisional ballots from voters who have changed addresses but not updated their voter registration, and seeks an extended deadline to certify the election results

Democrats are sore losers who will do whatever it takes to overturn election results they dislike.

If a conservative did the same thing he or she would be accused of trying to overturn Democracy, or some such nonsense.

Here’s the latest on Democrat attempts to steal the Georgia Governor’s race:

It should come as a shock to no one that the Democrat Party of Georgia announced Saturday that it had magically found “thousands” of new votes that help Stacey Abrams in her quest to steal the governorship of the state.

BREAKING: A handful of Georgia counties just reported thousands of new *absentee*, *early*, and *Election Day* votes that @BrianKempGA’s numbers did not account for, significantly closing the gap. #CountEveryVote #gapol

Democrats would count votes for a year if they were able to because, the more anyone counts the more Democrat votes appear.

It happens in every recount and it happens every time a vote takes long to come in.

Arizona is a current example of this phenomenon.

The Georgia Democrats conducted a “frantic search by phone and on foot, volunteers have been trying to find ballots that could help Democrat Stacey Abrams close the gap against Republican Brian Kemp in Georgia’s unresolved race for governor,” The Charlotte Observer reported.

Did you get that? They searched “to find ballots that could help Democrat Stacey Abrams.” No matter how many times they tell you they want to make certain that “every vote counts” what they really mean is they want to find a way to steal these elections.

Kemp leads in unofficial returns, and he already has resigned as secretary of state to start a transition with the blessing of the outgoing GOP governor, Nathan Deal. President Donald Trump tweeted Friday that Kemp “ran a great race in Georgia – he won. It is time to move on!”

Yet Abrams, who hopes to become the nation’s first black female governor, sent out volunteers and campaign staff in search of votes that she hopes could still tilt the margin toward her. The goal was to reach voters who used a provisional ballot to make sure they take steps to ensure their vote was counted by Friday evening, the deadline.

It wasn’t clear whether the effort paid off, but a majority-black county with more than 750,000 residents in metro Atlanta, DeKalb, said it would remain open past normal hours for provisional voters who needed to provide identification so their votes could be counted.

The story was different elsewhere. Two groups supporting Abrams’ call to count all votes, ProGeorgia and Care in Action, said at least 12 other counties had certified election results before Friday, a move that could leave provisional ballots uncounted. The secretary of state’s office did not immediately respond to an email seeking comment.

The New Georgia Project, which Abrams founded, had volunteers fanned out across the state looking for provisional ballot voters ahead of Friday’s deadline. Besides knocking on hundreds of doors, the group was coordinating with black radio stations, flooding social media and texting hundreds of thousands of voters who might be wondering about provisional ballots.

Nse Ufot, executive director of the group, said the effort “is not about the candidates.”

“This is about whether we’re going to have a functioning democracy,” said Ufot. “Otherwise, people won’t be reasonably assured that the will of Georgians is reflected in the results of the elections.”

Abrams’ lawyers are exploring options to ensure all votes are counted. Her campaign leaders say they believe she needs to pick up about 25,000 votes to force a runoff.

In a warehouse-turned-phone bank near downtown, dozens of volunteers converged to make phone calls to voters who used a provisional ballot.

Helen Brosnan of the National Domestic Workers Alliance stood on a chair and shouted, “How many calls do you think we can make? Can we make hundreds of calls? Let’s do this!”

Marisa Franco, 27, saw a friend’s Facebook post about the effort, then showed up at the warehouse to volunteer Friday morning.

“I think that it’s really central to democracy that everybody who is eligible to vote can vote and has the least amount of barriers possible, so I’m just here to make sure that every vote counts,” she said.

Returns show Kemp with 50.3 percent of almost 4 million votes, a roughly 63,000-vote lead over Abrams. The difference is enough for an outright victory if total totals remain the same, but it’s a narrow sum, considering the large turnout.

The Associated Press has not declared a winner in the race for Georgia governor. The AP will reassess the race Tuesday, the deadline for counties to certify election results to the state.

STATISTICALLY IMPOSSIBLE : "Democrats in Georgia have now mysteriously discovered another 5,569 votes of which 4,804 were for Stacey Adams."

This brings the entire election nationwide into doubt.

Why is it all the races that were originally called for the Republican are now “too close to call” and oddly, the mysterious newly found votes seem to be Democrats?
Florida Governor
Florida Senate
Arizona Senate
Georgia Governor

Joe Biden: "I'll develop some disease and say I have to resign" If Disagreements With Harris Happen

Uh Oh: Sidney Powell Reveals Some Of Her Witnesses Have Been ‘Threatened’ And ‘Beaten Up’