Candace Owens, spokeswoman for Turning Point USA, just tweeted her version of the “Democrats Guide to Fighting Conservative Wins” and as you might expect it’s tearing up social media today.

This is exactly on point: 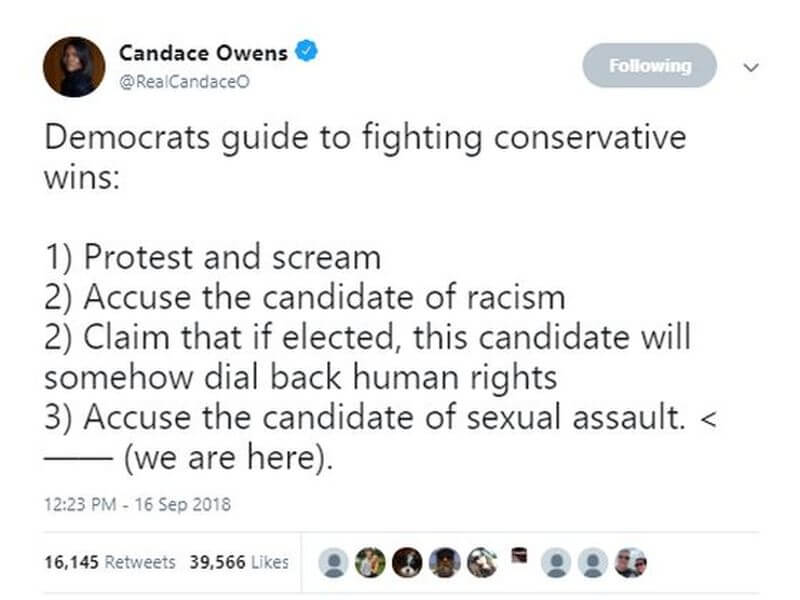 Brett Kavanaugh’s accuser has a dirty little secret she’s not been exactly forthcoming about.

It’s turns out Kavanaugh’s mother was the judge involved in foreclosing on her parents home:

Is this a Supreme Court confirmation battle–or is it a soap opera titled Montgomery County?

Turns out that Brett Kavanaugh’s mother was the judge in in a 1996 home-foreclosure case in which the defendants were the parents of Kavanaugh’s last-minute attempted-rape accuser Christine Blasey Ford. The house in question, pictured above, is in Potomac, one of the highest-income towns in Montgomery County, Maryland, the Washington, D.C. suburb that is one of America’s highest-income residential areas.

Indeed, the entire cast of characters in Ford’s up-to-the-wire emergence from the shadows of Dianne Feinstein’s secret anti-Kavanaugh files seems to hail from upscale Montgomery County in what is turning out to be a complex edge-of-the-seat multi-generational saga. Move over, The O.C.!

If those are her parents, it’s a pretty unusual coincidence.

Then it gets worse:

Confirmed it is her parents.

Also confirmed. Her Brother Ralph III, is an attorney, and had cases in her courtroom. pic.twitter.com/Wdoc4FbHlc

Republicans need to continue with the confirmation process.

Stopping based on fake accusations like this will do permanent damage to the ability of any Republican to get confirmed or elected to anything.

As James Woods pointed out:

“If #Republicans don’t stand up to these #MeTooLynchings, the #Democrats will destroy them, one nomination, one election, one man at a time. These fabricated smear jobs are a calculated cancer. The line in the sand must be drawn. #ConfirmKavanaugh”

If Kavanaugh goes down over this, every candidate and nominee will face a similar lynching.