Turning Point USA spokesperson Candace Owens just took Al Sharpton to the woodshed for his long history of racism and keeping blacks on the Democrat plantation. 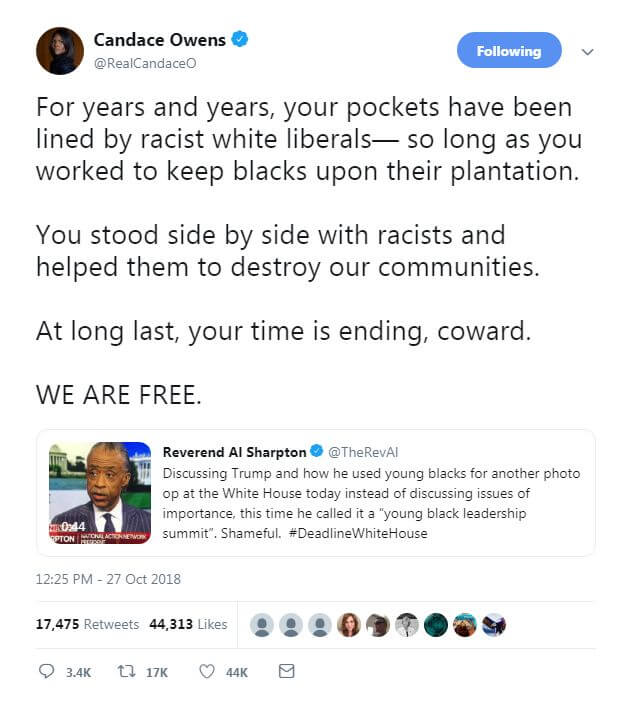 Poverty pimp and race hustler Al Sharpton really hates it when black people decide to think for themselves and vote against the Democrats damaging agenda.

The race agitator appeared on MSNBC and laced into President Donald Trump and the young black conservatives who visited the White House for the Young Black Leadership Summit.

“Why do you need a young black summit?” he asked. “Because it was not a summit. It was a Make America Great rally, the use of young blacks as props which really is an insult to them. There are black Republicans that have some dignity and have some issues they want to discuss.”

Wow. A lot to unpack there tax cheat Al.

They were being used as “props” because they don’t conform to your concluded way of think? And because of that they don’t have dignity?

And Al, if we are going to talk about someone using black people as props we should start with you and your use of people like false rape accusers Tawana Brawley and Duke Lacrosse accuser Crystal Mangum who was later convicted of murdering 46-year-old Reginald Daye.

But Al was not done. He was so proud of his assertion that he continued it on Twitter.

“There’s nothing wrong w/young Blacks wanting to be Republican, but there is something wrong w/them being used as props so that he (Trump) can take his shots against the media on a day that we have to watch CNN & others deal w/bomb squads out in front of their door,” he wrote in a tweet, quoting his appearance on MSNBC along with video of it.

“There’s nothing wrong w/young Blacks wanting to be Republican, but there is something wrong w/them being used as props so that he (Trump) can take his shots against the media on a day that we have to watch CNN & others deal w/bomb squads out in front of their door.”#DeadlineWH pic.twitter.com/WkuZrRVun1

Terrence K. Williams, who attend the summit, fired back at Sharpton.

Thank you @realDonaldTrump for inviting us to the White House.
Al Sharpton said you paid us to be there and if so where is my Check? The Lies they tell!
Also Thank you @charliekirk11 & @RealCandaceO for making this happen. pic.twitter.com/vOpHzGyzAb

Other black Republicans like Fox News’ Charles Payne and The Hodge Twins, were among those who also took exception to Sharpton’s characterization of the young, black conservatives.

Rev, Sharpton lit the fuse in so many situations where mediation was needed stoking raw emotions for explosive outcomes. He was holed up in a luxury hotel a few miles from Ferguson smoking an expensive cigar and drinking upper shelf liquor while all hell was breaking loose there. https://t.co/ltGefEiv8V

For years you have made millions by pimping the black community and on top of that you didn’t even pay your taxes #alsharpton #thereval https://t.co/qRcXQJ4Qat

These 400+ beautiful young black leaders came from all across the country . Some have never been on a plane before

Oh, and the IRS called, you still owe your taxes you con artist. https://t.co/UQBHM0GS8b

He noticed. That’s all that matters. 😊 https://t.co/qLbwzryd3X