According to several media reports, Hillary Clinton – the failed 2016 candidate – might be considering another presidential run in 2020.

Never mind, of course, that she’s already a national loser – and will be 73 years old if she decides to run – apparently her enmity for President Donald Trump is so strong, she’s considering it.

How do we know? Well, she’s giving more speeches lately – laced with “outrage” over any and all actions by our current president. And here’s the kicker: Some ask for money and they all sound like they are “official statements.”

As Michael Goodwin in the New York Post writes: Hillary Clinton is up to something.

Five times in the last month alone, she sent e-mails touting her super PAC’s role in combating President Trump. Most seized on headline events, such as the family-separation issue at the southern border. 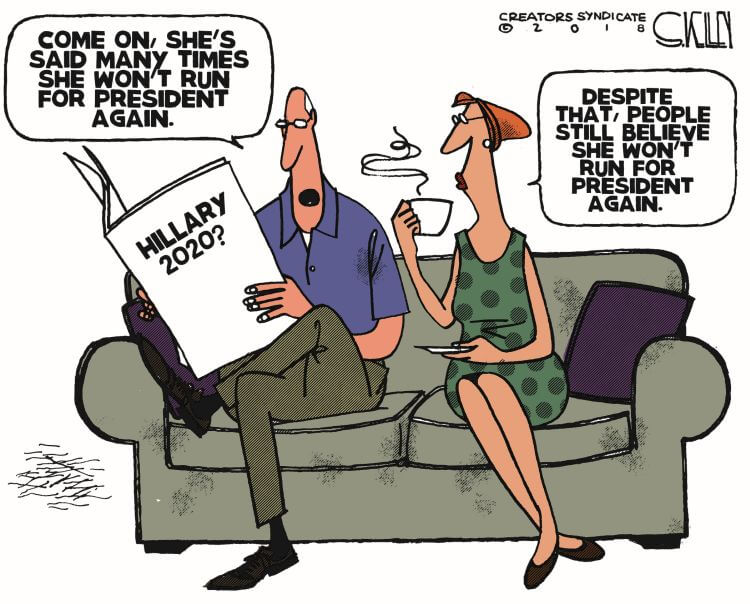 Under the message line, “horrific,” she wrote June 18: “This is a moral and humanitarian crisis. Everyone of us who has ever held a child in their arms, and every human being with a sense of compassion and decency should be outraged.” She said she warned about Trump’s immigration policies during the 2016 campaign.

Then – just three days later, her group, “Onward Together” announced they had raised $1 million and would spend it with leftist activist groups.

Then, the day after Supreme Court Justice Anthony Kennedy announced his retirement, she trotted out a new “resistance partner,” called “Demand Justice.” It promises to protect “reproductive rights, voting rights and access to health care” by keeping Senate Democrats united in opposing any conservative Trump nominee.

Goodwin speculates that these groups are “Clinton 2020 campaign vehicles in waiting:”

With the Democratic Party locked in a battle between its far left wing and its far, far left wing, no single leader has emerged to unite it. Clinton is trying to play that role by being a mother hen to the fledgling activists drawn to politics by their hatred of Trump.

If they were active in 2016, most probably supported Bernie Sanders in his primary challenge to Clinton. But by helping to fund them now, she is putting them in her debt for later.

Ah, but will she need their support later? Is she really going to make a third run for the White House?

Not long ago, I told a group of friends, all liberal Dems, that I believed she was keeping open the possibility of a rematch against Trump, and might already have decided to run.

It was unanimous — they were horrified. “I would not give her a single cent,” one man, formerly a big donor to Clinton, said emphatically.

Their reasons are no surprise: Her moment has passed, she was a terrible candidate and her endless claims of victimhood are tiring rather than inspiring. It’s time to find new blood.

There’s no other front-runner for the nomination in 2020, at least for now. And she’s banking on the fact that hatred for Trump will eventually have to rally behind someone, so why not her? 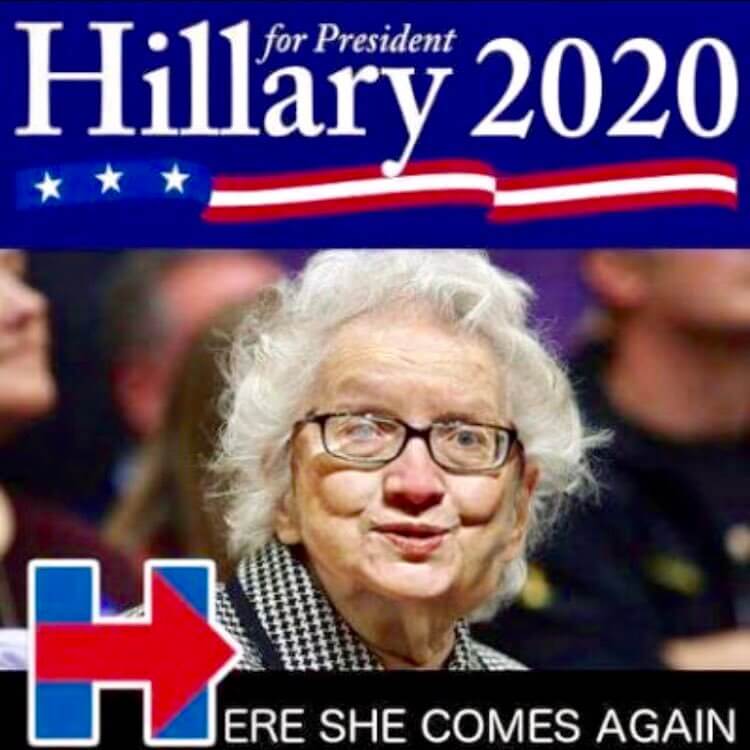 What do you think? Does she have a chance? Is this a godsend for Trump supporters? Sound off below!