The media, big tech and the Democrats are desperate for us to believe that Joe Biden won the 2020 election fair and square and that there was no election fraud or manipulation of votes.

They’ll go to great lengths to suppress or ridicule any thought or evidence to the contrary. In fact one could make a good argument that media and big tech suppression of important stories helped Joe Biden get as many votes as he did.

Now that Biden has been declared the winner by the media the suppression and censorship of conservative voices is going to get even worse.

They say a picture can be worth a thousand words so here in one cartoon is exactly what Democrats and the media have served up for us this holiday season: 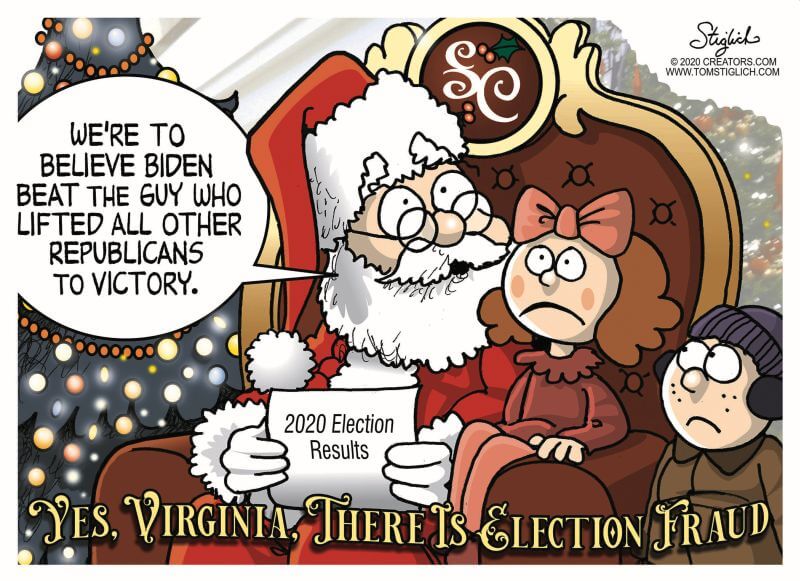 The story is Biden won and that’s final, anyone thinking otherwise will be classified as a lunatic by the media and big tech.

It does not matter that there are cases of fraud that are well documented, in fact most of those examples will never see the light of day for most people.

It does not matter that no losing president in modern times has had “coattails” like Trump did. How is that even possible?

It is apparent that the job of the media today, including Fox News, is to promote stories that help Democrats and bury those stories that hurt the party.

Former DNI Ric Grenell Claims There Was ‘Chaotic Mess’ in Nevada and Pennsylvania, Lots of Ballots Thrown Out

During an interview on Newsmax TV former Director of National Intelligence Ric Grenell made the claim that there was a “chaotic mess” in the way the election was handled in Nevada and Pennsylvania and that lots of ballots got thrown out.

We agree with Grenell that the last minute changes were unfair and illegal. Whether a court is willing to throw out the “results” of the election remains in doubt.

It is all going to turn on the Supreme Court and we may know the answer sooner rather than later, as Ryan Ledendecker reports:

Lawyers for President Donald Trump found out on Friday that a federal appeals court struck down a lawsuit filed previously that challenged a number of voting procedures in the state.

While that may sound like bad news on the surface, there is most definitely a silver lining, as it now means that Trump’s legal team is able to take the matter all the way up to the top — to the United States Supreme Court.

According to Fox News, the 3rd U.S. Circuit Court of Appeals ruling on the lawsuit was written decisively, saying that “the campaign’s claims have no merit.” The ruling upheld a previous ruling from Republican-appointed U.S. District Judge Matthew Brann, who wrote a scathing response at the time, as the lawsuit had requested hundreds of thousands of votes from Pennsylvania citizens be invalidated.

In Brann’s ruling from last week, he wrote that the lawsuit was “like Frankenstein’s Monster, has been haphazardly stitched together,” citing a number of errors in the lawsuit.

“Free, fair elections are the lifeblood of our democracy. Charges of unfairness are serious. But calling an election unfair does not make it so. Charges require specific allegations and then proof. We have neither here,” Bibas wrote.

However, and that’s a big however… Trump lawyer Jenna Ellis didn’t appear to be shaken up by the Friday ruling, even though it marked yet another defeat in a long line of defeats for Trump’s legal teams. That’s because now, the Trump legal team will be able to take the matter to the Supreme Court, which, thanks to the president, has a solid conservative majority.

Ellis indicated as much in a Friday tweet, in which she not only slammed the Pennsylvania court system but seemed more than happy to be able to elevate the matter to the court of all courts.

“[email protected] and me on Third Circuit’s opinion: The activist judicial machinery in Pennsylvania continues to cover up the allegations of massive fraud. We are very thankful to have had the opportunity to present proof and the facts to the PA state legislature. On to SCOTUS!” Ellis tweeted.

.@RudyGiuliani and me on Third Circuit’s opinion:

The activist judicial machinery in Pennsylvania continues to cover up the allegations of massive fraud.

We are very thankful to have had the opportunity to present proof and the facts to the PA state legislature.