The United States of America under the leadership of Joe Biden has become a laughingstock.

Half of the population appears to be insane, and can’t even define simple and basic things like “man” or “woman.”

Now because of Biden, the US military is headed down the same path, where insane ways of thinking are being forced on those who have volunteered to serve our country.

They say a picture is worth a thousand words and cartoon below brilliantly illustrates just how “woke” our military has become: 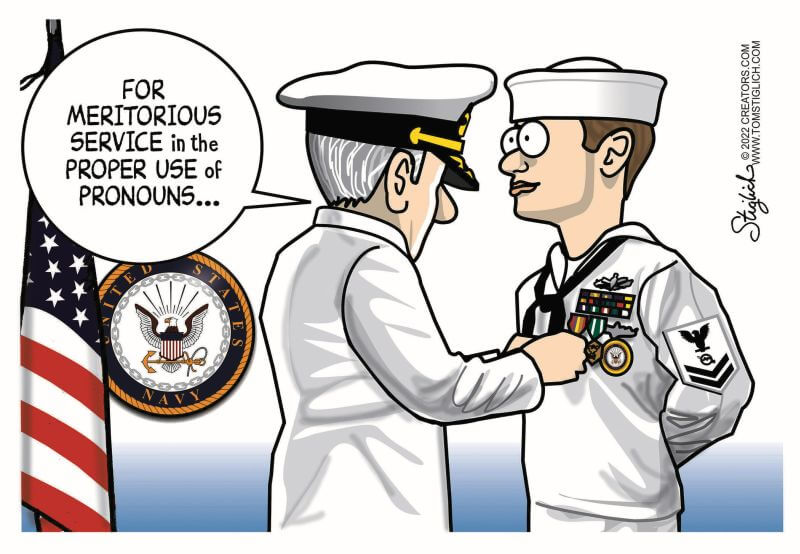 Does that sadly sum it all up?

Here’s more on how the US Navy is enforcing the use of “pronouns” among our servicemen and women:

In a move that is certain to scare our adversaries, especially China, Russia and Iran, the US Navy has released a new instructional video on the proper use of pronouns.

Watch and be amazed at the prowess of our mighty “progressive” military:

Actually, watching that video makes me want to barf.

The entire purpose of the military is to defend our country from all potential invaders and to conduct overseas operations as needed to ensure our national security and maintain our alliances.

This video in no way contributes to that mission and instead only serves to distract from the core function of the military.

It also serves to divide by forcing leftist ideology down the throats of those who have vowed to defend our country up to the cost of their lives.

These young people should be allowed to serve as they intended and not forced to conform to the woke demands of the Biden administration.

If this continues then no sane rational 18 year old should join the military until it is reformed and purged of woke officers and ideology.

Young people will be better off learning a valuable trade than be forced to endure the leftist hell that the military is rapidly becoming.

In fact it has gotten so bad that even West Point is teaching CRT:

Judicial Watch was forced to serve the U.S. Department of Defense with a Freedom of Information Act request after the group’s initial requests for instructional materials were denied.

One presentation included a graphic discussing “modern day slavery in the USA,” while another instructed students to discuss “How White Networks Exclude Black Men from Blue-Collar Jobs.”

“Do you think Affirmative Action creates and [sic] environment for ‘reverse discrimination?’ Use CRT to support your answer,” cadets are asked, according to the presentations.

The watchdog group also said it uncovered a three-credit class being taught in the Social Sciences Department at West Point titled “The Politics of Race, Gender, and Sexuality.”

No wonder China, Russia, Iran, North Korea and other feel emboldened to act against the interest of the United States.

While their militaries are focused on defeating their adversaries (us) we are busy worrying about the proper use of pronouns in the US Navy.