Conway appeared with Blitzer on Thursday in an interview when the question about her husband was presented to her.

“It’s a sensitive question and it’s a political question. It’s a substantive question,” the host said to her as he introduced the segment.

“I don’t want to talk about your marriage, I know there are issues there. Your husband, George Conway, is a lawyer –”

“What did you just say?” she said. “No, no, no. Did you just say there are issues there? You don’t want to talk about my marriage but –”

“I don’t want to talk about your marriage,” the host said as he cut her off before Conway said “Why would you say that?”

“I want to talk about a substantive point, that your husband, George Conway, made. He was on television all day yesterday during the first day of the impeachment hearings,” he said.

“So before you play the clip, which I haven’t seen. Why? And why are you doing that?” Conway said to the host.

“Because he’s a legal scholar, he’s a lawyer was really going after the president of the United States and he was all over television yesterday,” he said before he played the clip.

“You should not have just said to your audience, ‘I don’t want to talk about your marriage, I know there are issues.’ Why did you say that? Why would you say there were issues?” she said before the clip played.

“Where is the shame, where is the introspection,” an irate Conway said to Blitzer.

“You wanted to put it in my husband’s voice because you think somehow that that’ll help your ratings, or that you’re really sticking it to Kellyanne Conway,” she said.

“And let me be very clear, you didn’t stick it to Kellyanne Conway. I think you embarrassed yourself, and I’m embarrassed for you because this is CNN now.

“I looked up to you when I was in college and law school. I would turn on CNN to see what Wolf Blitzer had to say about war, famine, disruption abroad.

“I really respected you for all those years as somebody who would address the news, and now the news is what somebody’s husband said on a different network,” she said. 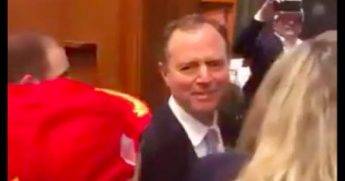