The latest mantra on the left is we all need to “unite” and “come together” now that the media has declared pretender-in-chief Joe Biden to be the presumed president-elect.

Of course all of this sudden desire to “come together” is all about show and playing pretend since Dems really have no interest in unity or compromise.

Their negotiating philosophy is “my way or the highway” so they want unity so long as we all agree to conform.

They say a picture can be worth a thousand words so here is the Democrat’s total hypocrisy on “coming together” brutally summed up with a single cartoon. 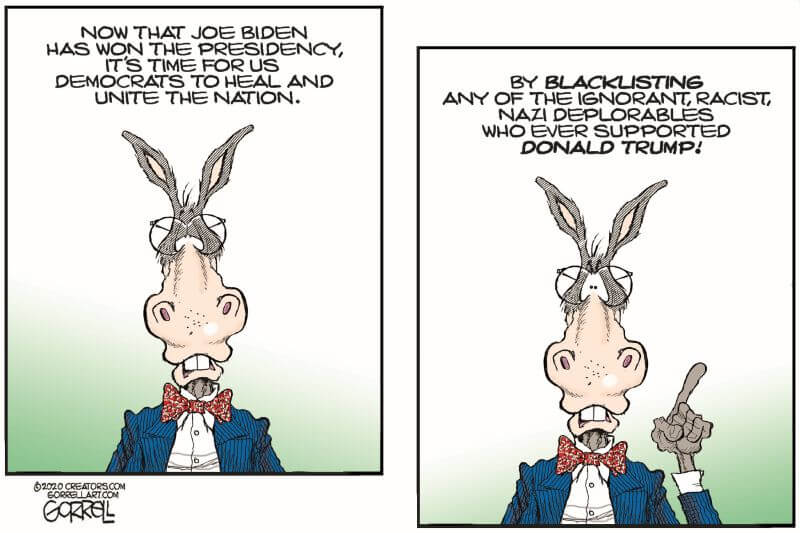 And of course there’s one other BIG problem with the whole “unity” thing:

Let’s be clear, while President Donald Trump’s chances at winning a second term in the White House are not what they were a week or two ago, there are still plenty of legal battles taking place across the country, with some of the most potentially impactful litigation reportedly happening this week.

Until all of the legal dust is settled and the inauguration on January 20 happens, it’s still not technically clear who might hold the keys to the White House. With multiple allegations of ballot and voter fraud in most of the key swing states needed to win the election, there’s a lot to figure out still.

So, it’s no surprise that, according to Breitbart, a recent poll of Trump’s supporters indicated that a staggering 79 percent of them believe that the media-declared results of the election are not valid and also believe that the 2020 election was outright stolen from Trump.

As Breitbart pointed out, 79 percent is an unprecedented level of distrust in the results of an American presidential election — there’s really not been anything even close to that in American history.

Adding to that, the poll also revealed what Trump’s supporters believe is the root cause of the nastiness of the election was — the media. A whopping 83 percent of Trump supporters said that they believe the media is the enemy of the people.

The poll looked at several other indicators of how Trump’s supporters are feeling, with marked changes in how they feel about Democrats now compared to how they felt just four years prior. Apparently, 81 percent of Republicans have less respect for Democrats right now than they did four years ago. On the other side of the aisle, 77 percent of Democrats feel the same about Republicans.

A few other interesting tidbits from the poll show that 28 percent of Democrats only want Biden to serve for one term, which is scary, as to me that indicates that millions in the party are already preparing for how they’ll push radical California Sen. Kamala Harris into presidential power.

Another scary idea is that the poll revealed that 59 percent of Democrats want to completely end the electoral college and solely rely on the popular vote to choose future presidents. If that were to somehow happen (and there are many groups working on this right now), Republicans would have virtually little-to-no chance of ever winning a presidential election again.

In contrast, 61 percent of Republican indicated that they wanted to keep the electoral college system in place, which was a surprisingly low number, in my opinion. If large population centers are given the power to select presidents, again, Republicans might as well not even try.

This poll, and many others, are clear indicators that there has been a number of paradigm shifts in modern American politics — and unfortunately, mostly for the worse.

We can’t say what happens from here, but we know that a bulk of Trump’s 75 million voters still feel that something extremely bad took place this time around. Hopefully, it’ll all be exposed in time.

The Late Show with Stephen Colbert / YouTube screen shot Biden Says He Thinks of Jobs When Thinking About Climate Change, So Why Did He Kill the Pipeline?