Democrats want President Donald Trump to destroy the United States’ relationship with Saudi Arabia over the death of Washington Post reporter Jamal Khashoggi who was not a United States citizen.

Media outlets from CNN to The New York Times have excoriated the president for not taking action for a man they describe as a hero.

But what they do not tell anyone is that in the 2007 book “The Looming Tower: Al-Qaeda and the Road to 9/11” Khashoggi was a friend of Al Qaeda head Osama bin Laden.

And, the book says, like bin Laden he wanted to see an Islamic state worldwide, The Arab Weekly reported.

Lawrence Wright, author of The Looming Tower: Al-Qaeda and the Road to 9/11, couldn’t have imagined one of the other characters in his book was going to be at the centre of a huge political and diplomatic controversy, no less than the book’s central character, namely Osama Bin Laden.

The book was adapted for television as a series with the same title and tells the story of Al-Qaeda’s infamous attacks on New York and Washington. In one paragraph, Wright mentions a close friend of Bin Laden’s who shared the latter’s ambition to “establish an Islamic state anywhere.” That friend was Jamal Khashoggi. Both Bin Laden and Khashoggi were at the time active members of the Muslim Brotherhood and later Bin Laden would split from the Brotherhood to form with Abdullah Azzam Al-Qaeda, the most dangerous organisation in the world. Khashoggi, Bin Laden, and Azzam, were all the merry companions of the same extremist group.

On page 78 of his book, Wright quoted Khashoggi as saying that he and Bin Laden believed that “the first one [Islamic state] would lead to another, and that would have a domino effect which could reverse the history of mankind.” The noun phrase looming tower in the book’s title was taken from Surah An-Nisa in the Holy Quran and clearly refers to the attack on the twin towers of the World Trade Center in New York. 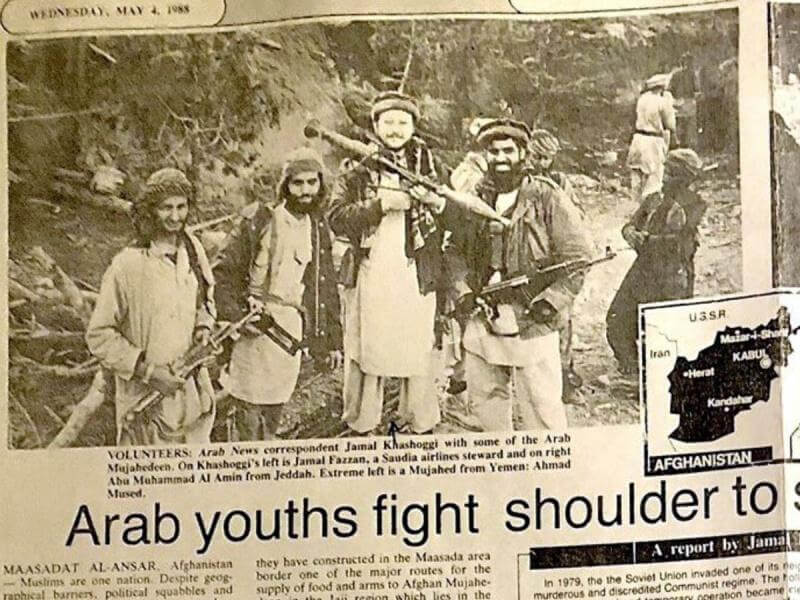 Today, the world is busy keeping up with the news of the disappearance of Jamal Khashoggi, journalist and Human Rights activist in Saudi Arabia, but very few know the man’s past and his affiliation with Al-Qaeda during the war in Afghanistan. He promoted Saudi Mujahedeen focusing on his friendship with Bin Laden.

On May 4, 1988, the Saudi daily Arab News published a report by Jamal Khashoggi about his tour in Afghanistan in the company of Al-Qaeda operatives. Even though Khashoggi was just a journalist doing a report, the photos published with the article show him wearing Afghani garb and shouldering a RBG rocket launcher.

Less known perhaps is that US federal prosecutors had in 2002 indicted Enaam Arnaout, head of an Illinois Islamic charity, who was shown in the same Arab News report walking next to Bin Laden. Arnaout was charged with “conspiracy to provide material support to terrorists, racketeering conspiracy, conspiracy to launder money and money laundering and wire fraud.”

The article of course included interviews with Bin Laden and a number of other founding members of Al-Qaeda.

Khashoggi’s Arab News report was given the title “Arab youths fight shoulder to shoulder with Mujahedeen” and it detailed the activities of the Al-Qaeda founding members in Pakistan during that crucial period of the Afghani campaign.

An Arab expert in Jihadist issues, who wished to remain anonymous, said that “Jamal Khashoggi keeps forgetting that the participation of Arab Mujahedeen next to the Afghani Mujahedeen was just part of a game controlled by the CIA from beginning to end.”

Our source went on to say: “Jamal Khashoggi was in the end an intelligence agent in journalist clothes. If he’s not found alive, he would be the victim of a game where journalism and intelligence services are all mixed up and which he had never imagined that one day it would turn against him. Usually in these kinds of games, any foreign party can come into the game at the opportune moment to settle certain scores with a certain party. This time, it looks like it is the Kingdom of Saudi Arabia.”

Mr Khashoggi’s past acquaintance with Bin Laden is attracting unexpected attention couched with disbelief after controversy erupted over Donald Trump Jr., the son of the US president retweeted messages including one by Patrick Poole, a national security and terrorism correspondent for PJ Media, a conservative news and commentary blog.

In the tweets, Poole shared pictures of Khashoggi with Afghan Mujahedeen and commented: “I didn’t realize until yesterday that Jamal Khashoggi was the author of this notorious 1988 Arab News article of him tooling around Afghanistan with Osama bin Laden and al-Qaeda co-founder Abdullah Azzam. He’s just a democrat reformer journalist holding a RPG with jihadists.”