The sign below brilliantly sums up the Democratic party philosophy in a nutshell – “If you don’t agree with me you are ignorant and wrong:” 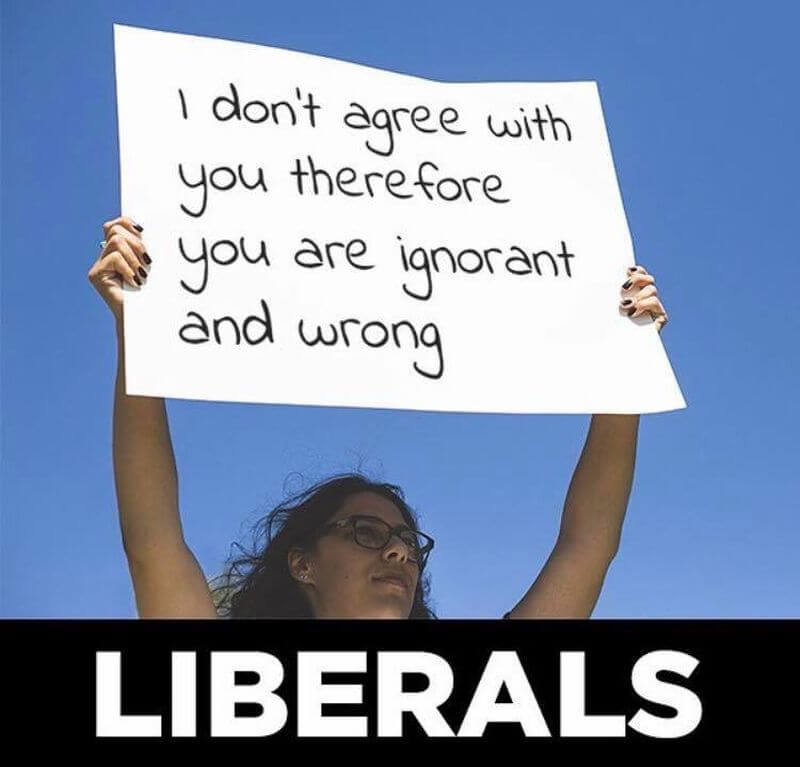 While Democrats may argue about this, we all know it’s true.

Most every conservative has experienced this intolerance for opposing views at least once.

Here’s an example, pulled from this weekend’s news:

Ryan said that Sanders head should be “lopped off” because Ryan believes Sanders lied to her and other reporters.

The press secretary’s dad, former Arkansas Gov. Mike Huckabee fired back, and now Ryan is crying about her safety.

“As I thank God this day and for his sacrifice as you should be doing, I have a warning for you!” she said to the former governor.

“If anything happens to me or mine or anyone connected to me, you and your daughter and this administration will be held accountable! So you better stop now!” she said.

Ryan is enraged that Sanders told a “lie” when she announced the firing of FBI Director James Comey at a briefing in May 2017.

“The president, over the last several months, lost confidence in Director Comey,” she said at the May 10 briefing.

But when she was interviewed by Mueller, Sanders said that is was a slip of the tongue and that she did not speak to any FBI agents.

How this was relevant to the Russia investigation is anyone’s guess but it was enough to severely trigger Ryan.

“Not only does she not have credibility, she lied. She out and out lied,” Ryan said on CNN as she was on the verge of tears.

“And the people, the American people can’t trust her. They can’t trust what’s said from the President’s mouthpiece-spokesperson from the people’s house. Therefore, she should be let go. She should be fired, end of story,” she said.

These are the same people who lied about Russia collusion and continue to lie about President Donald Trump.

Not satisfied with her rant and the calls for her to be fired Ryan took it a step further and called for Sanders to be beheaded.

Things got very dark as Ryan rhetorically suggested that since there was “a lack of credibility there, you have to start and start lopping the heads off.” she said.

“It’s fire me Thursday or fire me Good Friday. She needs to go,” the melodramatic reporter said in her CNN interview.

It is unlikely that Ryan actually wants Sanders to be beheaded but imagine what the media would be saying if Sanders said that about Ryan.

They would be calling for her to be fired and calling for the president to apologize. And it angered Sanders dad, former Arkansas Gov. Mike Huckabee.

“Will the @whca revoke April Ryan’s credentials? If not, they are gutless tools. CNN’s April Ryan Says Sarah Sanders’ Head Should Be ‘Lopped Off,’” he said

Will the ⁦@whca⁩ revoke April Ryan’s credentials? If not, they are gutless tools. CNN's April Ryan Says Sarah Sanders' Head Should Be "Lopped Off" https://t.co/8fdYiOzggf