Democrats have not wanted to admit that there is a crisis on the Southern border shared by The United States and Mexico.

They have said that it is not a crisis and insinuated it was a scheme created by President Donald Trump to get his wall.

Democrats could lie to themselves, to migrants and to the American citizens if they want to, but numbers do not lie.

United States Customs And Border Protection shared a graph that showed how desperate the situation is and how it is increasing. 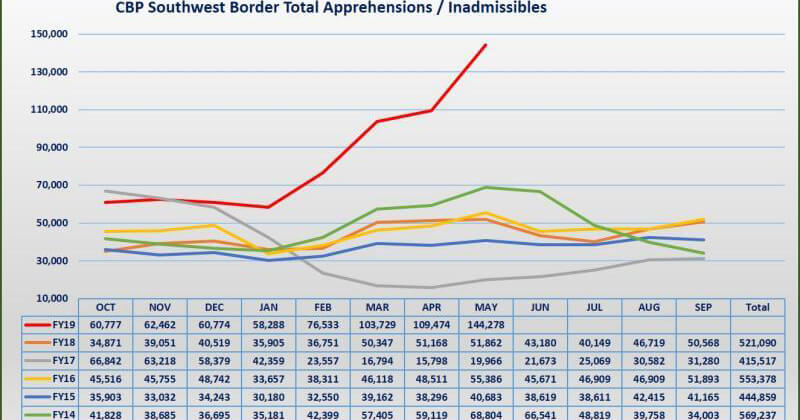 “In FY18, a total of 396,579 individuals were apprehended between ports of entry on our Southwest Border,” it said.

“In May, 11,391 people presenting themselves at ports of entry on the Southwest Border were deemed inadmissible, compared with 10,170 in the month of April and 10,889 in March.

“In FY18, 124,511 people presenting themselves at ports of entry on the Southwest Border were deemed inadmissible.

Should the wall be constructed?

“OFO inadmissibility metrics include: individuals encountered at ports of entry who are seeking lawful admission into the United States but are determined to be inadmissible.

“Individuals presenting themselves to seek humanitarian protection under our laws, and individuals who withdraw an application for admission and return to their countries of origin within a short timeframe,” it said.

The news over the last week has been filled with sordid tales of overrun immigration facilities along the southern border. Thousands of children seeking entry into the United States are being denied basic provisions like toothbrushes, diapers, and healthy food.

How can the Trump Administration be so callous, anchors and reporters keep asking. Why isn’t the U.S. better prepared for this influx of humanity?

Well, one reason might be that since Trump came into office, the media have insisted there’s actually no crisis along the border at all. Indeed, this is phony issue the Trump Administration is “manufacturing” so that he can secure funding for a border wall.

Democrats have likewise insisted there is no crisis along the border, and Congress has thus failed to secure the funding to improve these detention centers that the Trump Administration is seeking.

MSNBC’S Eddie Glaude Jr., told viewers: “This is a manufactured crisis. At the heart of this whole thing are a whole bunch of lies.”

Over on CNN, anchor Chris Cuomo said if there were actually a crisis on the border, his network would be covering it: “Wouldn’t we be there because it was a crisis, they were being overrun? There’s something manufactured about this.”

CNN’s Symone Sanders likewise said the situation on the border “is a manufactured crisis.”

Democrats have likewise been insistent there’s no crisis at the border. Hawaii Sen. Mazi Hirono said during last year’s government shutdown: “He’s taking 800,000 federal employees hostage so he can get his vanity wall. So he’s created this crisis, it’s a manufactured crisis.”

Her House colleague, Rep. Raul Grijalva (D-Ariz.), agreed: “All the elected officials, including Republican colleagues, all state that this is a manufactured crisis and a crisis manufactured by the Trump Administration.”

“He’s determined to convince you there is a crisis at the border,” Lemon said. “They’re playing the public, you, for suckers.”

Today, however, many of these same media personalities are attacking Trump — for not treating the situation on the border as a “crisis.”