The cartoon below brutally exposes Democrat’s hypocrisy over President Trump and his “threat to Democracy:” 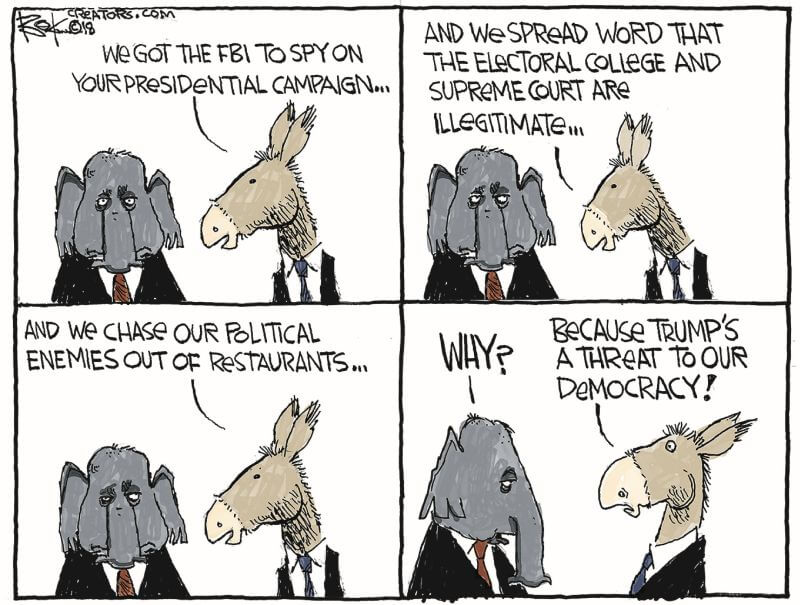 The only ones who are truly a threat to our way of government, and way of life, are the Democrats.

A California woman with a mohawk decided that she wanted to ruin the life of an elderly man who wore a Make America Great Again hat, but she ruined her own.

Parker Mankey, who looks exactly like what you would expect a raging liberal to look like, went on Facebook to brag about how she harassed the old man.

She bragged about how she harassed him at a Starbucks, left, came back and harassed him some more and then wanted to dox him and ruin his life, she said in a now deleted Facebook post.

“Anybody in Palo Alto know this freak. He was sitting in Starbucks. I think he lives in Palo Alto. He will never forget me and will think seriously about wearing that hat in my town ever again.

“If you see him in this hat, please confront him. You do not want to be the person who didn’t speak up as we slipped into fascism.

“I yelled at him. Called the entire Starbucks to order and yelled at him more about how it is not ok to hate brown people. He threatened to call the cops. I left after yelling at him some more.

“When I walked back by after picking up my lunch, he was still there. I went back in and yelled that I had changed my mind and wanted him to call the police because I wanted to know his name, where he lived, his wife’s name, and where his kids went to school.

“He wouldn’t call the police, so I called him a wimp. He got his stuff together to leave. I followed him to the register while he complained about me.

“Then chased him out of Starbucks yelling at him to get the fuck out of my town and never come back.

“At one point he tried to trip me up by asking if I lived in Palo Alto. He wasn’t expecting me to say that I was Palo Alto born and bred.

“I think he lives in Palo Alto, please please send me a DM if you see him anywhere.

“The part that was really heartbreaking to me was that in a full Starbucks, I was the only person yelling at him.

“There were other white people there who should have called him out. It is the duty of every white person in America to stand up to this every time they see it.

“Don’t be the person who does nothing to protect our brothers and sisters from this hatred. It is not OK,” she said.

And people did speak up, but not in the way that the mohawked woman wanted them too against the elderly man.

Rather, people contacted the music store where she works and in no time she found herself as the one on the unemployment line.

“With regard to the aforementioned incident on 4/1/19; the employee in question has been terminated. Gryphon does not believe anyone should be harassed or subject to hate speech no matter their beliefs,” Gryphone Strings wrote on Facebook.

“Music has historically been something that has brought people of diverse socio-political backgrounds together. We would like to make it clear that the opinions expressed and actions taken by the employee are not indicative of how we conduct ourselves at the shop and we hope we can continue to serve our customers across the country respectfully and universally as we have done for nearly 50 years,” it said.