The cartoon below brutally exposes the Democrat’s insidious playbook when it comes to the unfounded 36 year old accusations against Judge Kavanaugh. 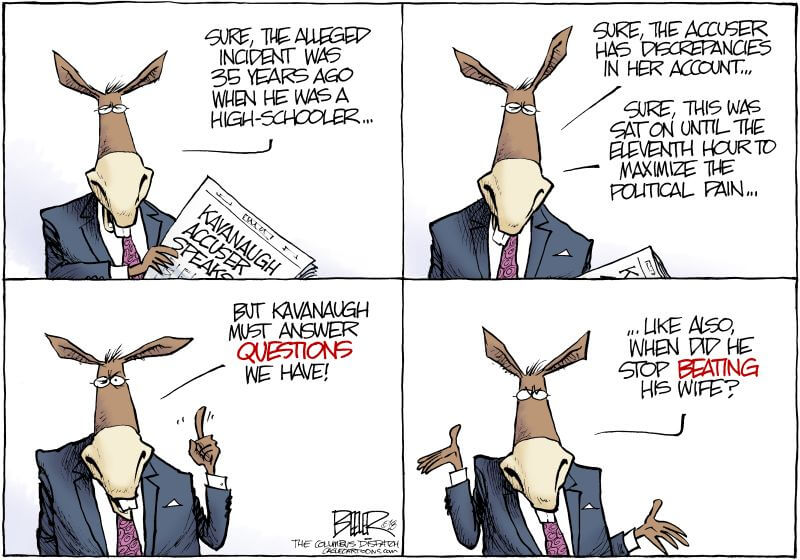 While Democrats plan to make Monday’s proposed hearing into a circus a key Republican has a plan that could make it even worse:

Key GOP Senator Susan Collins just lost her mind over Kavanaugh by proposing one of the most ridiculous things we’ve heard in a very long time.

But then it gets worse:

Such an approach would provide more continuity, elicit the most information & allow an in-depth examination of the allegations.

The folks over at HotAir describe some of the obvious issues with this:

Here’s a question for Collins about her trial model: what would the rules of testimony and evidence be?

If the Judiciary Committee adopts federal rules for litigation, the little Ford has in corroboration might end up excluded under hearsay rules (although that might be arguable), for instance.

Without being able to specify the date and location of the alleged attack, Kavanaugh’s attorney might object to Ford’s entire testimony for lack of foundation.

Do attorneys get to lead witnesses? Can witnesses answer at length regardless of the form of question?

There might be a lot more argument than testimony, and a bunch of 11-10 votes from the bench to settle those objections, too.

Even beyond the procedural issues this would raise in a Senate hearing process, the optics of it would look horrible.

Let’s assume that Ford is the victim of some kind of assault, whether or not it involved Kavanaugh.

Does Collins really propose to have an accused sexual assaulter’s attorney grill a victim on national television?

Good Lord, Democrats would eat lunch on that for years.

Besides, there is no way Kavanaugh would agree to this, let alone Ford.

He’s aiming for the Supreme Court, not Attorney General, so he has no upside to becoming a prosecutor by proxy in this or any other instance.

And note that Collins wants to leave room for committee members to ask questions too, which means this doesn’t even solve the grandstanding issue.

While Senator Collins’ suggestion is obvious lunacy, the worst part is it comes from a key GOP Senator.

That said, there’s an even bigger problem: