The cartoon below shows exactly who’s responsible for the increase in political violence in America this election season. 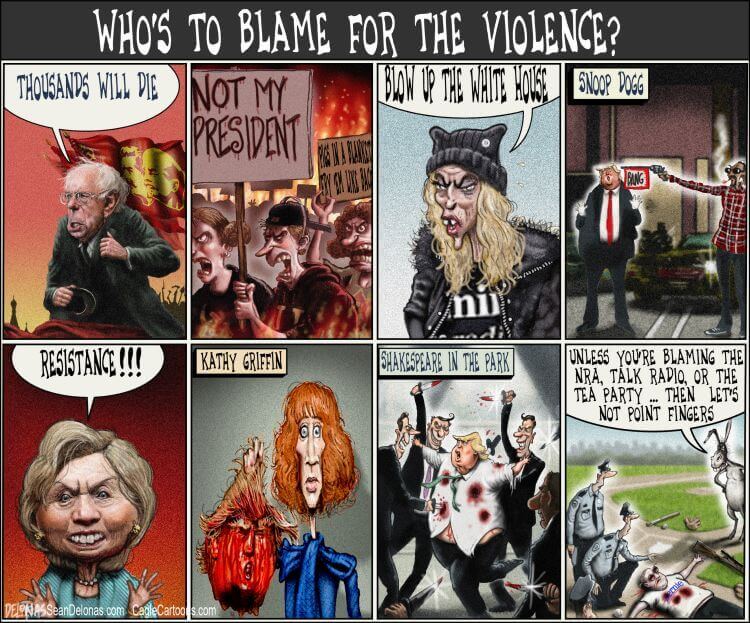 Does that abut sum it up?

The blame for the increase in political violence lies squarely with Democrats, who have REFUSED to renounce attacks on Republicans by their supporters.

The RNC has dropped a new ad that rightly frames the Democratic party as the party of mob violence:

Framing the Democratic Party as the party of violent attacks on anyone with whom it disagrees, the Republican National Committee has unveiled a new campaign ad that focuses on Democratic willingness to break boundaries and rules in the name of politics.

And it’s straight from recent headlines.

The ad opens with House Minority Leader Nancy Pelosi dismissing what she termed “collateral damage” to anyone who does not walk in lockstep with Democratic ideology.

The clip used in the ad came from remarks Pelosi made last weekend, which were reproduced in context by The Daily Wire.

“I think that we owe the American people to be there for them, for their financial security, respecting the dignity and worth of every person in our country, and if there’s some collateral damage for some others who do not share our view, well, so be it, but it shouldn’t be our original purpose,” she said.

The ad then touches on instances in which Republicans are facing intimidation, including a ricin scare at the home of Republican Sen. Susan Collins of Maine, who faced severe attacks from liberals for her support for the confirmation of Supreme Court Justice Brett Kavanaugh.

The ad also touches on violence that has not always grabbed mainstream media attention.

Why anyone would vote for a Democrat this election cycle is beyond be!