“House Speaker Nancy Pelosi and other senior members of Congress held talks in Jordan on Saturday with King Abdullah II and other top Jordanian officials.

Pelosi said in a statement the visit was at “a critical time for the security and stability of the region… With the deepening crisis in Syria after Turkey’s incursion, our delegation has engaged in vital discussions about the impact to regional stability, increased flow of refugees, and the dangerous opening that has been provided to ISIS, Iran and Russia.”

JUST IN: Trump lashes out at Pelosi as she visits Jordan to discuss Syria https://t.co/awNuxUOhH7 pic.twitter.com/IHYvewhZ7g

“We expressed our continued appreciation for the strategic partnership between the U.S. and Jordan and engaged in a constructive dialog on regional stability, counter-terrorism, security cooperation, Middle East peace, economic development and other shared challenges,” Pelosi said.

Pelosi and Senate Democratic leader Chuck Schumer on Thursday called an agreement between the United States and Turkey on a pause in Ankara’s offensive in northeastern Syria a “sham.”

She can’t string a sentence together, but Pelosi thinks she’s president now. https://t.co/ddvjjex1bc

The agreement “seriously undermines the credibility of America’s foreign policy and sends a dangerous message to our allies and adversaries alike that our word cannot be trusted. President Erdogan has given up nothing, and President Trump has given him everything,” Pelosi and Schumer said in a statement.

Congress’s top Democrats said the House of Representatives would vote on a bipartisan sanctions package against Turkey in the coming days.”

Once again Democrats are shredding the way our government is supposed to function because of their anger over Trump.

Can you imagine the outcry if Republicans got in the way of a Democratic President’s negotiations with foreign leaders and the conduct of overseas diplomacy?

There will come a day when Democrats will regret their actions, but it will be too late. 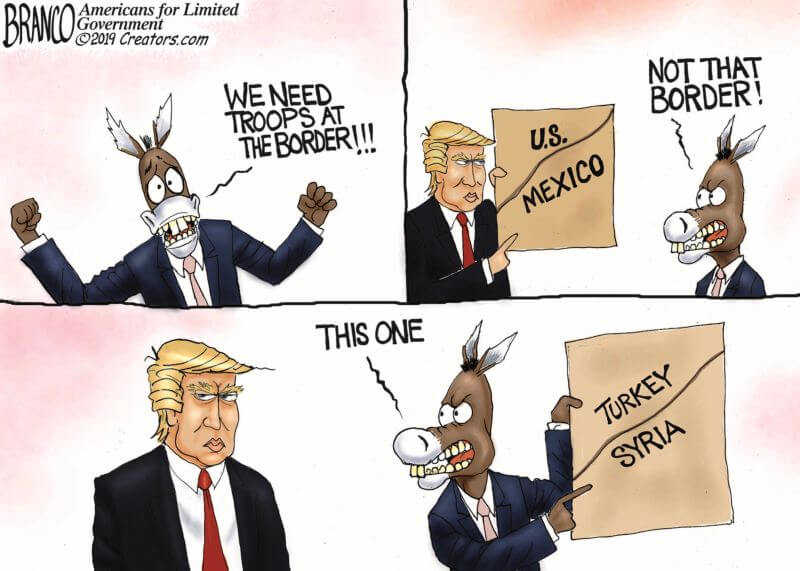