Here’s everything anyone needs to know about gun control in a single brutal cartoon: 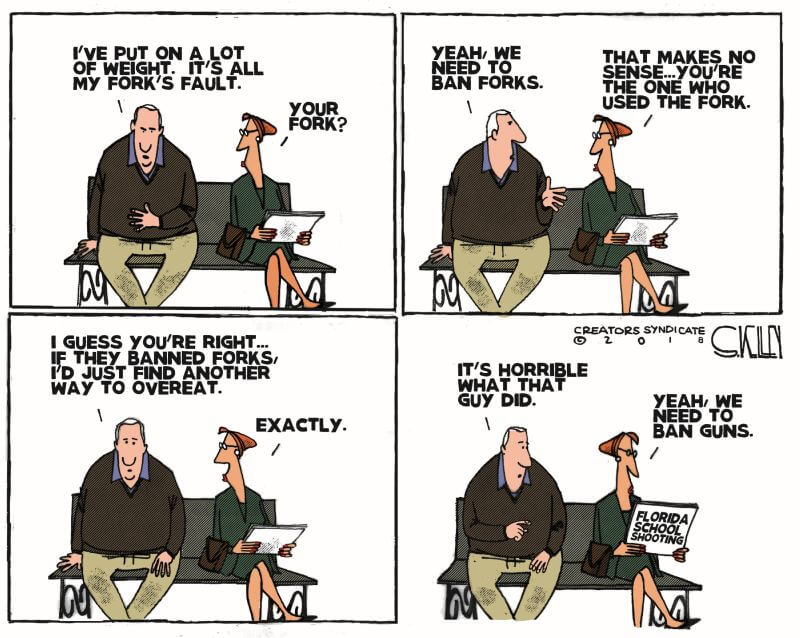 Three things in this life are certain: death, taxes, and that liberals will never stop exploiting tragedies to push gun control.

So it’s vital for every conservative to have a good grasp of gun grabbers’ talking points and the facts and reasoning to refute them. Fortunately, Erika Haas at Bearing Arms has written an invaluable piece providing just that, running down ten instances of sharp-witted Twitter users succinctly nuking liberal lies about guns and gun violence.

1) Celebrities are always a safe bet for maximum cluelessness, and few examples are more mind-boggling than this gem from Patricia Arquette, and one intrepid tweeter’s obvious rejoinder:

Almost like we should make murder and attempted murder illegal or something….🤔

Does Arquette actually believe she was saying something that wasn’t blindingly obvious already? Does she sincerely think murderers kill people because they simply don’t know they’re not supposed to, and that a refresher on individual rights is all they need to reform? Yeesh.

2) Mike Stuchbery is a history writer and educator. Apparently his bio reads “history writer” rather than “historian” because he’s not quite up to snuff, as the Daily Caller Ian Miles Cheong demonstrated by letting statistics demolish the following genius “point”:

An encore for the worst "historian" on Twitter. pic.twitter.com/TCs54n0Nkf

Is Mr. Stuchbery dishonest, or just wildly ignorant? We report, you decide.

3) Liberals are always complaining about the need for more gun laws. But as Willie Vanderbrink reminded the New York Times, one gun law already on the books reigns supreme. And the Left can’t stand it:

4) Now, House Minority Leader Nancy Pelosi definitely knows when she’s lying, which is pretty much daily. She’s never one to miss an opportunity to demagogue an issue, especially when there are dead bodies to exploit. Never mind pesky details like whether her proposed remedy actually would have saved any of them:

Which background check would have prevented Paddock from owning a firearm?

5) Stupidity isn’t the only thing the average actor or actress has going for him or her; they’re also raging hypocrites, like these famous folks who agreed to be talking heads for gun control:

It's time Congress stand up for public safety and against the NRA's radical agenda.

Text REJECT to 64433 to tell your reps to #RejectTheNRA pic.twitter.com/ko6xgMfD9d

But just one problem (stop me if you’ve heard this one):

Have any of these stars ever had to explain why guns keep them safer but Americans of more modest means should have to do without?

6) Ah, Chelsea Handler, the leftist scold who recently put the kibosh on her show to “focus on being a better, more knowledgable activist.” If the following tweet is indicative, she’s gonna have to get a lot better, and fast:

One tweeter replied with a comparison to another prohibition:

On this one, I’m actually going to have to part ways with Ms. Haas. While no law’s effectiveness is 100%, it’s simply not the case that prohibitions have no deterrent effect on the activity being regulated. Now, it’s absolutely true that gun laws don’t stop bad guys from arming themselves, but conservatives are supposed to recognize that gun control is wrong precisely because it is effective at disarming good guys.

A much better rebuttal to Handler would be citing Leah Libresco, the statistician who famously disavowed her past gun-control support last month after examining the evidence. She speaks directly to Handler’s point:

I researched the strictly tightened gun laws in Britain and Australia and concluded that they didn’t prove much about what America’s policy should be. Neither nation experienced drops in mass shootings or other gun related-crime that could be attributed to their buybacks and bans. Mass shootings were too rare in Australia for their absence after the buyback program to be clear evidence of progress. And in both Australia and Britain, the gun restrictions had an ambiguous effect on other gun-related crimes or deaths.

7) It’s especially galling when America’s number-one killer of children, Planned Parenthood, presumes to lecture America about the subject, both for the sheer evil on display and for the secondary double-standards, which are quite blatant:

In the United States, accessing a gun is easier than accessing an abortion. #ScaryStats

8) And then, of course, there are the lefties who simply make stuff up:

Boy, it sure is a mystery what Donald Trump means when he says “fake news”…

9) Here’s yet another reason why it’s futile to indulge liberals’ demands for new gun laws: They can’t be bothered to remember which gun laws we already have:

10) Finally, one of the most remarkable things about gun grabbers is how often they fail to hide their seething contempt for millions of their fellow Americans who would never hurt anyone:

Huh? You mean the tens of millions of Americans that have not, do not, and will not harm anyone with their legally owned firearms?

We hope these ten examples come in handy the next time you encounter a gun grabber. Are there any we missed? Share them in the comments below!