We all know Democrats have gone insane but how insane are they really?

Here in one brutally illustrated political cartoon is everything anyone needs to know about the state of the Democratic party and their leaders in 2020: 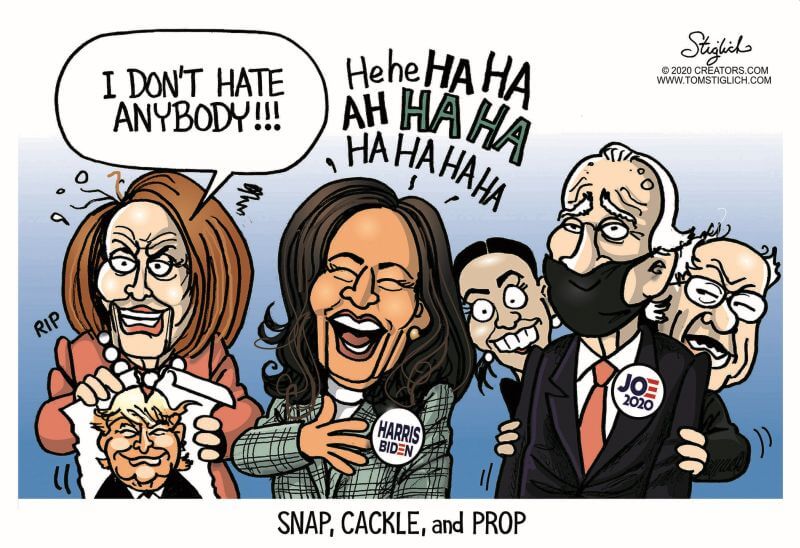 The three people who most embody the Democratic Party in this current election year are all nuts, and total frauds.

Problem is of course that AOC and her followers know very little about history, which is why Joe Biden feels free to make up stuff thinking he’ll get away with it.

According To Joe Biden, Americans’ Memory Of The Obama Administration Is “Not Very Good”

I can confidently say that I don’t know a single person in my orbit — not one — who would honestly state that they were better off under the Obama/Biden administration as opposed to President Donald Trump’s administration.

According to Fox News, recently, a certain Gallup poll which indicated that a clear majority — 56 percent to be exact — of Americans feel that they’re better off now than they were four years ago, lines up with my anecdotal observation.

But according to Democratic presidential nominee Joe Biden, if you feel the same way as I do, your “memory is not very good.”

Biden made the absurd statement about the American public on Monday when he was asked about his thoughts on the poll by a local Cincinnati reporter Kyle Inskeep.

“Why should people who feel that they’re better off today under a Trump administration vote for you?” Inskeep asked of the Democratic nominee.

Biden immediately replied with, “Well if they think that, they probably shouldn’t.”

You know, because according to him, 56 percent of Americans are apparently stupid.

Then the frail, 77-year-old candidate followed up his remark in a way that only he could — by stating incorrect information, before implying that we’re all so dense that our memories must be completely shot.

“They think- 54 percent of the American people believe they’re better off economically today than they were under our administration? Well, their memory is not very good, quite frankly,” Biden shot back.

As only a programmed Democrat robot could, Biden followed that up with an immediate attack on Trump, with the typical Democrat talking points about the Coronavirus pandemic.

“And in addition to that, we have a president who doesn’t share the values of most Americans. He’s not very honest with people. He’s flouting the conventions relative to public safety in terms of even now- not wearing a mask, a guy who has been a super spreader. But look, whatever they believe they should go out and vote. People should vote. Period,” he said.

You can watch his reply for yourself in the video clip posted to Twitter on Monday night.

“56% of Americans said that they are better off today than they were 4 years ago under the Obama-Biden administration. Why should they vote for you?”

Biden: Well if they think that, they probably shouldn’t pic.twitter.com/upKO1TMMZy

Monday was a rough day for Biden. Before accusing us all of having severe memory recall issues, Biden racked up a number of new gaffes while out on the campaign trail. One of them was a repeat of previous gaffes, where he apparently believes he’s still running as a “proud Democrat for the Senate.”

And speaking of memory issues, the 47-year political veteran couldn’t recall Sen. Mitt Romney’s name, instead referring to him as the “Mormon” who he once took on.

It’s truly amazing that out of the dozens of potential Democratic presidential nominees, the Democratic party actually picked Biden as their guy. As he racks up even more gaffes and ridiculous statements, I have to wonder how many voters on the left are beginning to experience a severe case of buyer’s remorse.

Steve Straub
Steve has been involved in national politics for over 20 years and helps run one of the largest conservative opinion and analysis sites in the country.
Press Sec Kayleigh McEnany Shreds the Media: ‘The American People Deserve Answers’ on Hunter Biden
Democrat Hypocrisy on Covid and Climate Change Brutally Summed Up by a Single Meme
Difference Between Joe Biden Versus Donald Trump Brutally Summed Up by a Single Cartoon
Brutal Cartoon Shows Evolution of Media Bias and Dishonesty in Our Big Tech Era
Johnny Carson's Resurfaced Reagan Skit and Biden Joke Show Courage Modern Hosts Lack
See more...