There is nothing that President Donald Trump does that does not trigger Democrats into a fanatic frenzy about him.

If the man were to sneeze on national television CNN would likely have a two hour documentary of the history of racist sneezing.

The mountains of investigations into nothing have fallen by the wayside and they continue to find new things to investigate.

And, as this meme says, if President Trump announced tomorrow that he had found a cure for cancer they would support cancer. 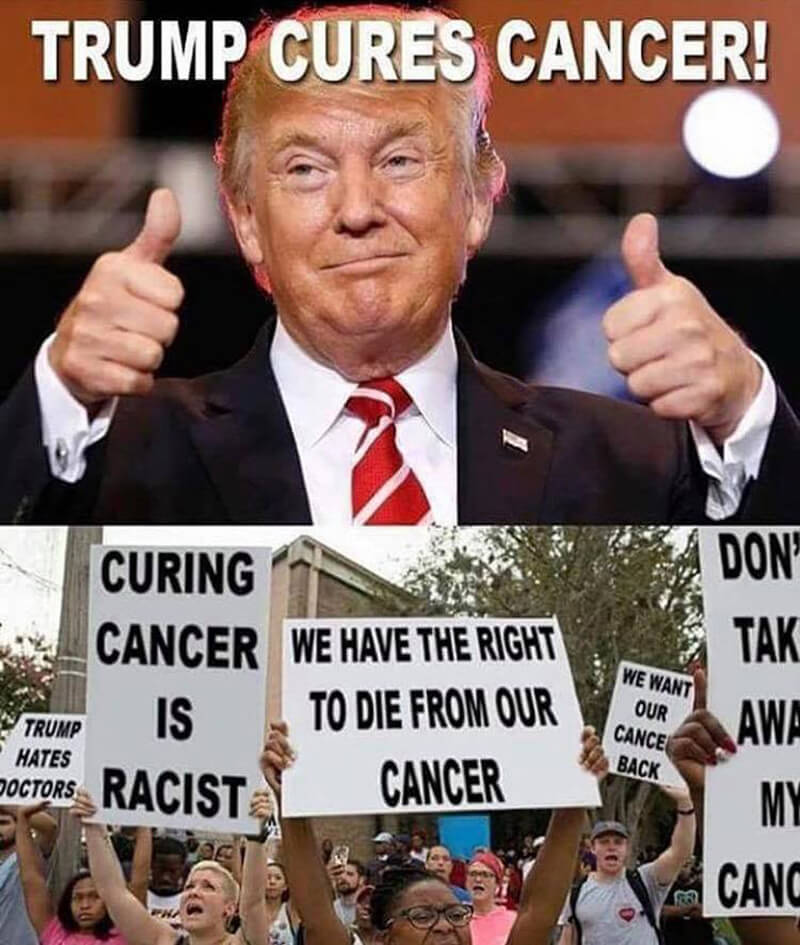 It is that type of psychosis that has people laughing at their ridiculousness, but what is more ridiculous is when former Vice President Joe Biden promised to cure cancer, but only if he wins.

Politicians tend to make many grandiose promises when they are campaigning but the new one from former Vice President Joe Biden is ridiculous.

The Democrat front runner said that if he is elected as the President of the United States he is going to cure cancer.

“A lot of you understand what loss is,” he said. “When loss occurs a lot of people come up to you and say ‘’I know how you feel.’ But you feel like saying ‘You have no idea how I feel.’”

“I promise you if I’m elected president, you’re going to see the single most important thing that changes America, we’re gonna cure cancer,” he said.

Here's the video of @JoeBiden promising to cure cancer if elected president.https://t.co/3doUlVOgcg pic.twitter.com/cRzsamV1Fc

It is a callous and desperate attempt to pander for votes from people who are desperate to believe that he could do this.

Scientists and researchers have spent decades searching for a cure. Billions of dollars has been given to find a cure. But he think he is going to find it.

Millions of researchers from all over the planet are spending their every dime on this. Every insurance company wants it cured. There’s not a person on the planet who isn’t affected. This is truly desperate and despicable to use this to try and garner votes.

Not a great campaign promise pic.twitter.com/XWGpZRRIH2

My father had colon cancer,I have seen long cancer take away people I https://t.co/3qcpi9rr9q not make promises until solid research is validated.

Man he just blew his chances at being president gg joe

What? Like, every type? Oh, and does that mean we give up efforts to prevent cancers? So if people who have a cancer which is never going to cause them significant trouble have to be cured regardless of the side effects of treatment, does that mean no choice?

Man I've heard it all now. This guy is a joke! I can't believe people are falling for this crap. Vote #Yang2020 for a realistic plan forward. #HumanityFirst

Wow did y’all hear that? If we want to cure cancer all we have to do is vote for Joe Biden. That’s it! How easy. 😳

Politicians & pharmaceutical companies play with our lives as if it were a game of chess without caring about the consequences of their actions. I’m disgusted that Biden uses this terrible disease that kills thousands every year to promote himself politically