The Hillary Clinton / Ruth Bader Ginsburg joke below has liberals up in arms, they’re furious about this: 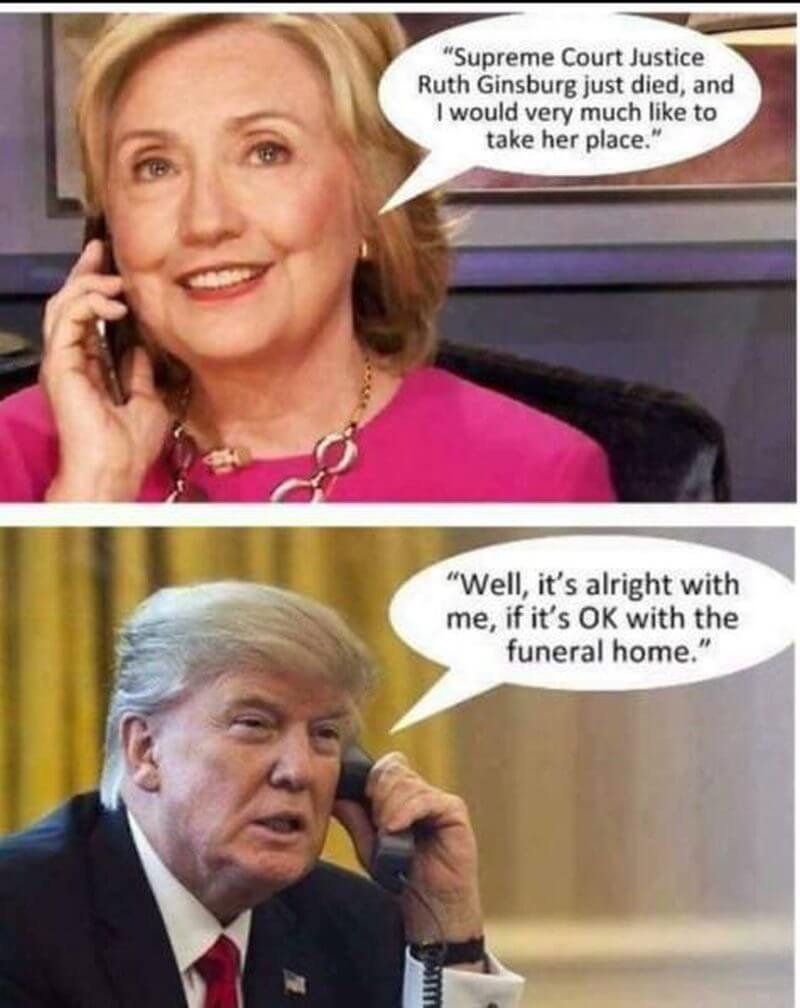 Now THAT is funny and we can imagine PrResident Trump reacting just that way!

while we wish no harm comes to Justice Ginsburg, and we wish her a speedy recovery, we still find the joke above hilarious.

Doctors who were not involved in the treatment of Supreme Court Justice Ruth Bader Ginsburg have painted a grim picture for her future.

“Based upon the statement, it is fair to infer she had a localized malignancy, which was treated definitely with radiation. It is good to know they see ‘no evidence of disease,’” Georgetown University’s Lombardi Cancer Center’s Dr. Louis M. Weiner said in an interview with the Los Angeles Times.

“This treatment has a high likelihood of successfully eradicating the cancer. It suggests she should be able to recover fully and return to work.

“As for the long-term prognosis, we don’t know. Pancreatic cancer has an ominous prognosis,” the doctor said.

“The likelihood of a relapse is very high. This may be very good local treatment. If it is caught early and treated, patients live longer and survive longer,” UCLA Medical Center cancer surgeon Dr. Mark D. Girgis said.

The survival rates of the disease, which the Justice has defeated in the past, show that only one in five people survives for even one year.

“While pancreatic cancer survival rates have been improving from decade to decade, the disease is still considered largely incurable.

“According to the American Cancer Society, for all stages of pancreatic cancer combined, the one-year relative survival rate is 20%, and the five-year rate is 7%,” The Hirshberg Foundation for Pancreatic Cancer Research said.

The 86-year-old Supreme Court Justice has had a series of frightening health issues in the past year including lung cancer and broken ribs.

Still, there is no sign that the octogenarian is considering retirement as it would give President Donald Trump the ability to appoint another justice, Reuters reported.

Liberal U.S. Supreme Court Justice Ruth Bader Ginsburg has completed a three-week course of radiation therapy to treat a cancerous tumor on her pancreas, a court spokeswoman said on Friday.

The 86-year old justice, who has had previous cancer scares, tolerated the therapy well and no further treatment is required, spokeswoman Kathy Arberg said in a statement.

An abnormality was first detected in July, and the tumor was identified following a biopsy performed on July 31 at Memorial Sloan Kettering Cancer Center in New York.

“She canceled her annual summer visit to Santa Fe, but has otherwise maintained an active schedule,” Arberg said.

“The tumor was treated definitively and there is no evidence of disease elsewhere in the body,” the spokeswoman added.

Pancreatic cancer is one of the hardest cancers to treat and prognoses can be bleak. According to the website of the Columbia Pancreas Center at Columbia University Irving Medical Center in New York, the percentage of people still alive five years after a diagnosis of pancreatic cancer that has not spread beyond the pancreas is 27.1%

Ginsburg, who joined the court in 1993, had two cancerous nodules in her left lung removed in December. She was previously treated for pancreatic cancer in 2009 and colon cancer in 1999.

In January, she missed oral arguments for the first time in her lengthy career on the court. As the oldest justice, she is closely watched for any signs of deteriorating health.

Ginsburg, appointed in 1993 by Democratic President Bill Clinton, broke three ribs in a fall in November. The nodules on her lung were found as part of the tests the justice underwent after that fall.

She returned to the bench in February and was an active participant in the remaining oral arguments of the court term, which ended in June. The court is currently in recess until October.

If Ginsburg, one of the nine-member court’s four liberal justices, were unable to continue serving, Republican President Donald Trump could replace her with a conservative, further shifting the court to the right. Trump has added two justices since becoming president in January 2017, cementing its 5-4 conservative majority.

During the second term of Democratic President Barack Obama, Ginsburg rebuffed calls from some liberals that she resign to allow the president to appoint a replacement, thereby avoiding the possibility of a Republican filling her seat.

A cult figure among U.S. liberals, Ginsburg has been dubbed “Notorious RBG” after the late rapper Notorious BIG.