Judicial Watch recently released new Clinton emails on the Benghazi controversy that had been covered up for years and would have exposed Hillary Clinton’s email account if they had been released when the State Department first uncovered them in 2014.

This Judicial Watch FOIA lawsuit led directly to the disclosure of the Clinton email system in 2015.

The Clinton email cover-up led to court-ordered discovery into three specific areas: whether Secretary Clinton’s use of a private email server was intended to stymie FOIA; whether the State Department’s intent to settle this case in late 2014 and early 2015 amounted to bad faith; and whether the State Department has adequately searched for records responsive to Judicial Watch’s request.

The court also authorized discovery into whether the Benghazi controversy motivated the cover-up of Clinton’s email.  (The court ruled that the Clinton email system was “one of the gravest modern offenses to government transparency.”)

The September 2012 email chain begins with an email to Clinton at her private email address, “[email protected],” from Jacob Sullivan, Clinton’s then-senior advisor and deputy chief of staff. The email was copied to Cheryl Mills, Clinton’s then-chief of staff, and then was forwarded to then-Deputy Assistant Secretary of State for Strategic Communications and Clinton advisor Phillipe Reines:

Below is my stab at tp’s for the Senator call. Cheryl, I’ve left the last point blank for you. These are rough but you get the point.

I look forward to sitting down and having a Hillary~to-John conversation about what we know. l know you were frustrated by the briefing we did and I’m sorry our hands were tied in that setting.

It’s important we see each other in person, but over the phone today I just wanted to make a few points.

First, we have been taking this deadly seriously, as we should. I set up the ARB in record time, with serious people on it. l will get to the bottom of all the security questions. We are also in overdrive working to track down the killers, and not just through the FBI. We will get this right.

Second, the White House and Susan were not making things up. They were going with what they were told by the IC [Intelligence community].

The real story may have been obvious to you from the start (and indeed I called it an assault by heavily armed militants in my first statement), but the IC gave us very different information. They were unanimous about it.

Let me read you an email from the day before Susan went on the shows. It provides the talking points for HPSCI [House Permanent Select Committee on Intelligence] and for her public appearance. It’s from a very senior official at CIA, copying his counterparts at DNI [Director of National Intelligence], NCTC [National Counterterrorism Center], and FBI:

Here are the talking points …

–The currently available information suggests that the demonstrations in Benghazi were spontaneously inspired by the protests at the US Embassy in Cairo and evolved into a direct assault against the US Consulate and subsequently its annex. There are indications that extremists participated in the violent demonstrations.

-This assessment may change as additional information is collected and analyzed and as currently available information continues to be evaluated.

–The investigation is on-going, and the US Government is working with Libyan authorities to bring to justice those responsible for the deaths US citizens.

That is exactly what Susan said, following the guidance from the IC. She obviously got bad advice. But she was not shading the truth.

Third, you have to remember that the video WAS important. We had four embassies breached because of protests inspired by it. Cairo, Tunis, Khartoum, and Sanaa. We had serious security challenges in Pakistan and Chennai and some other places. All this was happening at the same time. So many of the contemporaneous comments about the video weren’t referring in any way to Benghazi. Now of course even in those countries it was about much much more than the video, but the video was certainly a piece of it one we felt we had to speak to so that our allies in those countries would back us up.

(In fact, as Judicial Watch famously uncovered in 2014, the “talking points” that provided the basis for Susan Rice’s false statements were created by the Obama White House.)

Judicial Watch requested records related to the Benghazi talking points in May 2014. In July 2014, it filed suit. The Clinton email finally released this month was first identified by the State Department in September, 2014 but was withheld from Judicial Watch despite it specifically referencing talking points. After it was specifically described in an Office of the Inspector General report, the court ordered its production. It was only after Judicial Watch informed the State Department it was prepared to file a motion with the court to compel production of the records that the Department relented and produced the 2012 email in question.

(In an August 22, 2019, hearing, U.S. District Judge Royce C. Lamberth ordered production of the record in granting Judicial Watch significant new discovery in the case. Judge Lamberth said, “There is no FOIA exemption for political expedience, nor is there one for bureaucratic incompetence.” The judge also stated that the government has mishandled this case and the discovery of information including former Secretary Clinton’s emails so poorly that Judicial Watch may have the ability to prove they acted in “bad faith.”)

“This email is a twofer – it shows Hillary Clinton misled the U.S. Senate on Benghazi and that the State Department wanted to hide the Benghazi connection to the Clinton email scheme,” said Judicial Watch President Tom Fitton. “Rather than defending her email misconduct, the Justice Department has more than enough evidence to reopen its investigations into Hillary Clinton.”

The court is considering whether to allow Judicial Watch to question Hillary Clinton and her top aide in person and under oath about the email and Benghazi controversies.

Judicial Watch’s discovery over the last several months found many more details about the scope of the Clinton email scandal and cover-up:

The above was a press release from Judicial Watch. 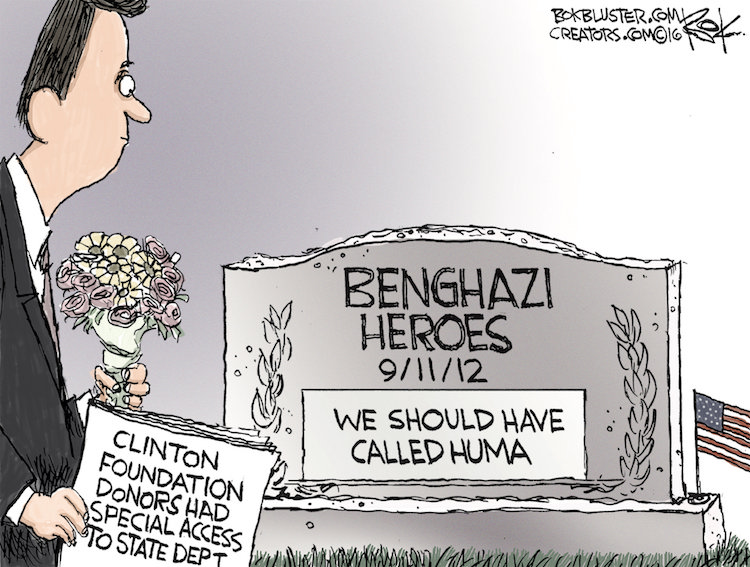