The savage cartoon below sums up why former Secretary of State John Kerry’s secret closed door dealings with our enemy Iran makes him a traitor to the USA: 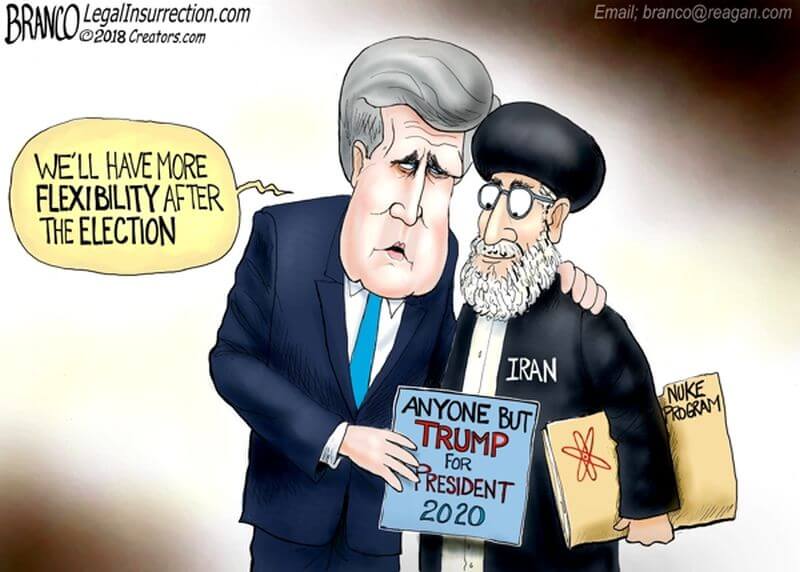 John Kerry is a traitor, and had a Republican done the same during the Obama years that’s exactly what that person would have been called.

Here’s the latest on this disgusting story: 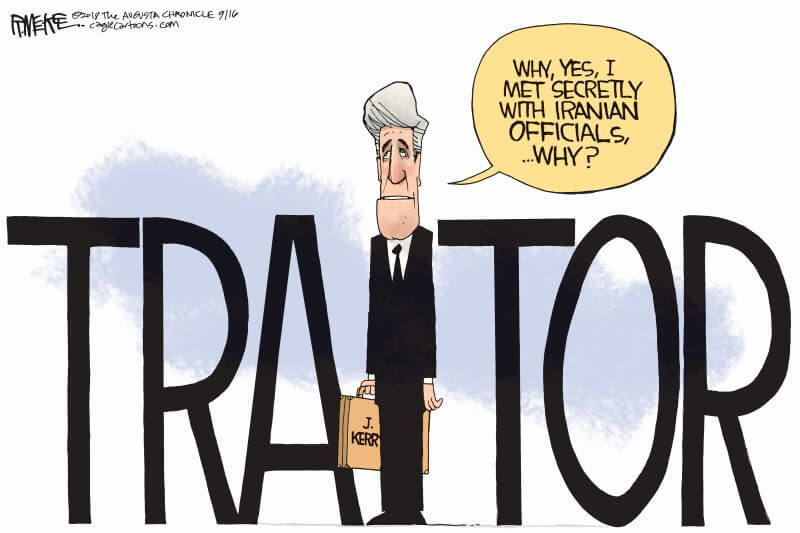 Secretary of State Mike Pompeo took John Kerry to the woodshed over his secret meetings with the Iranians:

Secretary of State Mike Pompeo on Friday blasted his predecessor, John Kerry, for holding “beyond inappropriate” private meetings with Iranian officials, alleging that Kerry was undermining U.S. foreign policy in an “unprecedented” manner.

“What Secretary Kerry has done is unseemly and unprecedented,” Pompeo said in a press conference.

“This is a former secretary of state engaged with the world largest state sponsor of terror.”

He added: “You can’t find precedent for this in U.S. history. And Secretary Kerry ought not to engage in that kind of behavior.”

An aide to Kerry did not immediately offer a comment.

The former secretary and one-time Democratic presidential nominee has defended his meetings with Zarif, including during recent interviews to promoting his new book, “Every Day is Extra.”

He acknowledged that the Iran nuclear deal, which Kerry helped negotiate during the Obama administration but which Trump quit this year, was among the topics discussed.

John Kerry is a vile disgusting man who is actively working with an avowed enemy of the United States to undermine our President.

Mollie Hemmingway sums it up nicely in a series of tweets:

“What Sec. Kerry has done is unseemly and unprecedented.” — @SecPompeo on Former Sec. John Kerry’s current work with Iran. “Inconsistent with what the foreign policy of the United States is… Beyond inappropriate.”

“actively undermining US foreign policy as former secretary of state is literally unheard of” — @secpompeo about John Kerry’s current work with Iran.

Reporter asks Pompeo if members of Obama admin other than John Kerry are also attempting to subvert current US foreign policy toward Iran.

Pompeo says he won’t discuss others “today” but adds that to the extent they are meddling, his admonitions to Kerry apply to them as well.

I’m reminded that when Tom Cotton sent a public letter to Iran reminding them of the Senate’s role in ratifying treaties according to the U.S. Constitution, Democrats and their media allies claimed it was a criminal Logan Act violation.