Attorney and Clinton inner circle member Lanny Davis thinks Americans should be very grateful to Michael Cohen for his ‘bravery:’

1) We do not forget @MichaelCohen212 who is currently serving his sentence and away from his family and friends. Lets remind him we are grateful for his bravery, as he has been the only person to stand up and tell the truth in this entire matter – in contrast to @realDonaldTrump

This of course upset another of the left’s former “brave souls,” and Democratic party poster girl Stormy Daniels who decided to get in on the action: 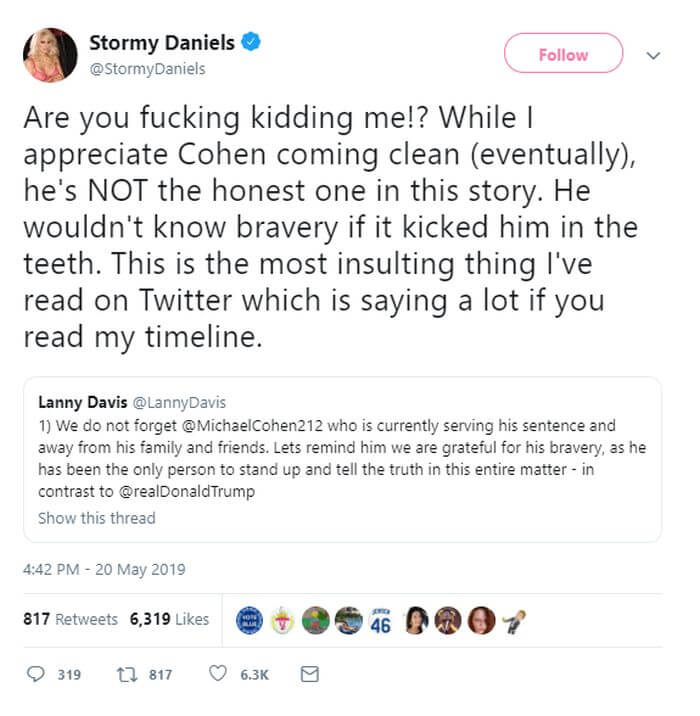 Well…I couldn’t say balls. He doesn’t have those.

This of course generated plenty of reaction:

Cohen flipped on Trump but not the Russian mob. Lanny reps Dmytro Firtash, a Russian Oligarch.

Michael Cohen was never brave. He was caught. 🙄

Stop trying to make Cohen look like a saint. He is doing time for the crime (s) he committed. He was a bully like his former boss. Cohen is not brave, he got caught.

Drawing a comparison to something extremely-bad does mean that something very-bad becomes good.

A scale of scumbaggery is useless.

Yeah sorry but your boy was a thug, he has a chance at redemption but it’s a ways off. I wish him and all others the best of course. Let him earn his way back.

No one in America is grateful to Michael Cohen or thinks he is a hero, except maybe his wife and kids. Even then it’s unlikely.