A Missouri high school principal has been suspended after tweeting a pro-Second Amendment message to David Hogg.

The tweet in question showed the principal, along with members of his family, posing with their guns. The caption read simply “#Merica”.

The tweet was in response to anti-gun activist David Hogg calling for more gun control.

A Missouri school principal is on paid leave after replying to a tweet from a gun control activist.

The tweet was a reply to David Hogg, one of the students who survived the mass shooting at Stoneman Douglas High School last year in Parkland, Florida.

Hogg tweeted support for research on gun violence urging people to contact their congressmen and ask them to support funding.

The 19-year-old has become an activist in support of gun control since surviving the school shooting that killed 17 of his classmates.

A school principal with the Platte County School District replied to Hogg’s tweet with pictures of himself and his children holding guns. The text of the tweet simply said #merica.

Join @AMarch4OurLives and @bradybuzz in the #WeNeedtoKnow campaign to get Congress to fund gun violence research.

Record your own video explaining why we need to find gun violence research and tag your congressman and senators with #WeNeedtoKnow https://t.co/ynkGEYUh0q 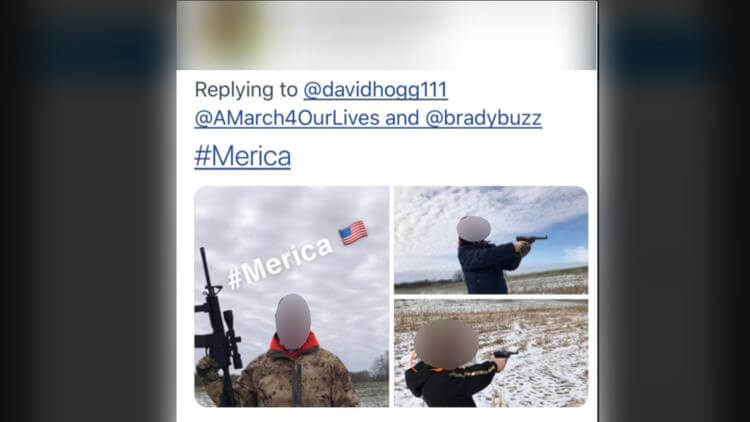 Here’s the full statement from the school:

On June 11, 2019, a school district employee posted a tweet in response to a comment encouraging Congress to fund research on gun violence. The post was made from the employee’s personal Twitter account. Posts from employee personal social media accounts do not reflect the views or opinions of the Platte County R-3 School District.

The District learned of the tweet on June 12, 2019, and immediately placed the employee on paid, administrative leave while we investigate the situation. We understand why the public response has been strong with regard to student safety in our nation’s schools. We intend to address the situation immediately and in a manner consistent with our Board of Education policies, as well as our goal of ensuring a safe and caring environment for our students, staff, and community.

Due to the confidentiality of personnel matters, this is all we can share at this time.

In other words, he wasn’t speaking as a school official but as a private citizen. The news agency wisely declined to share the principal’s name, but the edited screenshot of the tweet–edited to remove identifying information–clearly illustrates that it wasn’t threatening.

In a statement, the school system recounts what happened, but even they fail to claim the principal said anything threatening or dangerous.

Basically, he admitted to having guns.

The school suspended him, citing “student safety” concerns, though he is on paid administrative leave versus unpaid. That’s something, I suppose.

Unfortunately, the problem is that he was suspended at all. He did nothing wrong. Owning guns is both legal and moral. Someone owning guns doesn’t make them a bad person or a bad role model for children. It damn sure doesn’t make someone a bad educator. There’s nothing about this that would justify his suspension.

That is, of course, unless you somehow subscribe to the idea that gun owners should be neither seen nor heard.

Ladies and gentlemen, this is the stigmatization of gun owners. This, in part, is what it looks like. They’ve sent a message, not just to this principal but to every teacher and administrator in the school system. The message is to keep your support for the Second Amendment silent. If you don’t, you risk your job.

Now, bear in mind that teachers can express support for Planned Parenthood, feminism, illegal immigration, communism, socialism, or any number of other things without censure. If they were punished, they’d scream to high heavens on First Amendment grounds and the media would trip all over themselves to make sure everyone knew about it.

This time we have almost nothing. A man’s career hangs in the balance because of a tweet, one that wasn’t threatening or demeaning in any way. …